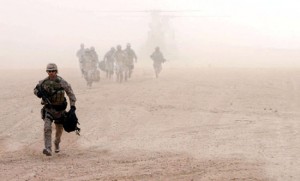 In Los Angeles, federal bureaucrats callously canceled an estimated 40,000 diagnostic tests and treatments for American veterans with cancer and other illnesses to cover up a decade-long backlog.

In Memphis, a VA whistleblower reported that his hospital was using contaminated kidney dialysis machines to treat America’s warriors. The same hospital previously had been investigated for chronic overcrowding at its emergency room, leading to six-hour waits or longer. Another watchdog probe found unconscionable delays in processing lab tests at the center. In addition, three patients died under negligent circumstances, and the hospital failed to enforce accountability measures.

In Phoenix, at least 40 veterans died waiting for VA hospitals and clinics to treat them, while government officials created secret waiting lists to cook the books and deceive the public about deadly treatment delays.

At the University of California at Berkeley, UC President Janet Napolitano (former secretary of the Department of Homeland Security) has offered $5 million in financial aid to illegal alien students. Across the country, 16 states offer in-state tuition discounts for illegal aliens: California, Colorado, Connecticut, Illinois, Kansas, Maryland, Minnesota, Nebraska, New Jersey, New Mexico, New York, Oklahoma, Oregon, Texas, Utah and Washington. In addition, the Rhode Island Board of Governors for Higher Education, the University of Hawaii Board of Regents and the University of Michigan Board of Regents all approved their own illegal alien tuition benefits.

In 2013, the nation’s most selective colleges and universities had enrolled just 168 American veterans, down from 232 in 2011. Anti-war activists have waged war on military recruitment offices at elite campuses for years. The huge influx of illegal aliens in state universities is shrinking the number of state-subsidized slots for vets.

In 2013, the Obama Department of Homeland Security released 36,007 known, convicted criminal illegal aliens, according to the Center for Immigration Studies. The catch-and-release beneficiaries include thugs convicted of homicide, sexual assault, kidnapping, and thousands of drunk or drugged driving crimes.

The same Department of Homeland Security issued a report in 2009 that identified returning combat veterans as worrisome terrorist and criminal threats to America.

In Washington, Big Business and open-borders lobbyists are redoubling efforts to pass another massive illegal alien amnesty to flood the U.S. job market with low-wage labor.

Across the country, men and women in uniform returning home from Iraq and Afghanistan have higher jobless rates than the civilian population. The unemployment rate for new veterans has spiked to its worst levels, nearing 15 percent. For veterans ages 24 and under, the jobless rate is a whopping 29.1 percent, compared to 17.6 percent nationally for the age group.

A Forbes columnist reported last year that an Air Force veteran was told: “We don’t hire your kind.”

And last December, Democrats led the charge to reduce cost-of-living increases in military pensions — while blocking GOP Alabama Sen. Jeff Sessions’ efforts to close a $4.2 billion loophole that allows illegal aliens to collect child tax credits from the IRS, even if they pay no taxes. The fraudulent payments to illegal aliens would have offset the cuts to veterans’ benefits.

America: medical and welfare welcome mat to the rest of the world, while leavings its best and bravest veterans to languish in hospital lounges, die waiting for appointments, and compete for jobs and educational opportunities against illegal border-crossers, document fakers, visa violators and deportation evaders. Shame on us.