If you think of the United States of America as a store, its recent decisions and scandals resemble a sale, perhaps a fire sale. Or maybe even a “Going Out of Business” sale. 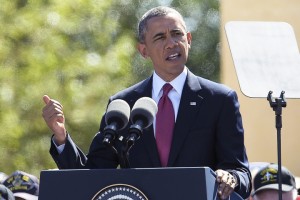 The list of dramatic markdowns is breathtaking. They include trading away five murderous terrorists for a likely Army deserter, an open invitation to tens of thousands of illegal immigrants to cross the Mexican border, and a decision to recognize the terrorist group Hamas as part of the Palestinian government.

On the home front, environmental regulations will cost thousands of coal miners their jobs and drive up the cost of electricity for millions. The Obamacare mess is hardly resolved, and the Veterans Affairs scandal keeps getting worse. The acting agency head reported the deaths of 18 more vets who were kept off the official waiting list in Phoenix.

Ticking quietly in the background is the mother of all threats — an Iranian nuclear bomb. That ticking grew louder last week as the ayatollah mocked our nation by standing in front of a banner that proclaimed, “America cannot do a damn thing.”

Technically, he’s wrong. It’s not that we cannot stop the mad mullahs’ march. It’s that President Obama has taken the military option off the table, and without it, Iran has nothing to fear. Our impotence was a choice. Add to the combustible mix the expansionist moods in Russia and China, and the series of events recalls an observation by the late economist Herb Stein. Speaking in another context, he said that, “If something can’t go on forever, it won’t.” That sums up the current sense of the nation as a whole.