I’m looking at you, Beyonce: Condemning Republicans’ for their unhinged fans, but not ‘Queen Bey’

Question: Why aren’t liberal celebrities ever held accountable for stoking their unhinged fans’ violent threats and stupidity — the same way Republican candidates are called on to disavow every last remote and random act of bad behavior of their supporters?

The double standards are as glaring as a glittering diva’s Harry Winston diamonds.

I’m looking at you, Beyonce. 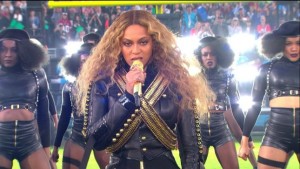 The singer dropped a highly incendiary album over the weekend titled “Lemonade” on her husband Jay-Z’s failing music streaming service, Tidal. When last we heard from booty-shaking Beyonce, she was growling and cursing her way half-naked through her Black Panther anthem, “Formation,” at the Super Bowl.

“Middle fingers up, put them hands high/ Wave it in his face, tell him, boy, bye,” she rants before jeering that her adulterous partner “better call Becky with the good hair.” Wielding a baseball bat, the designer gown-swathed star sashays down the street in a music video obliterating car windows and fire hydrants.

In case she isn’t clear enough, she threatens: “Ashes to ashes, dust to side chicks.” Whack! Thwack! Bam!

Cue the pop star’s bloodthirsty mob. Beyonce didn’t just toot a dog whistle. She sounded the alarm for her wolf pack. So far, the rabid fans have virtually mauled two women and one teenager in their online witch hunt on Beyonce’s behalf.

When fashion designer Rachel Roy took to Instagram to joke about her good hair after “Lemonade’s” release, Beyonce’s spittle-flecked fans, who call themselves the “Beehive,” swarmed onto Roy’s social media accounts. They littered Roy’s Instagram comments with lemon and bumblebee emojis, for starters. Then, they quickly escalated to nasty death threats calling the ex-wife of entertainment mogul Damon Dash (Jay Z’s former business partner) a “b—-h” and a “hoe” who is going to “get f—-ed up.”

Roy was forced to turn her social media accounts private. But that didn’t provide any protection for two other innocent bystanders in the Beehive’s hysterical onslaught.

Rachel Roy’s 16-year-old daughter, Ava, has also been subjected to blistering harassment online. A photo she posted on Instagram with her mom was littered with nasty insults calling her a “whore” and other unprintable vulgarities.

“R.I.P. to your mom,” one menace jeered. “Tell your basic mutt face Mother to keep her legs closed to [a] married man,” another lashed out (accompanied by 8 lemon emojis, of course).

If that weren’t bad enough, Beyonce’s low-information buffoons also confused cooking star Rachael Ray for Rachel Roy. Misplaced misogyny and bullying ensued. The chef’s pretty Instagram pictures of spring vegetable soup and steak salad were inundated with f-bombs and body-shaming. The Beehivers took to Twitter to label Ray a “30-minute meal hoe” among other diatribes, which continue despite the attackers being told of the mistaken identity.

Ray, Roy. What difference does it make? Watch out, all you Rachel Reys and Rachel Ruys out there. You’re next.
The bitter bees show no signs of letting up — and Beyonce’s silence about the vicious vendetta of her swarm speaks volumes. Her own personal army of Bernard Goetzes now suspects British singer and former Jay-Z protege Rita Ora of being the other other woman. “Rita Ora must die” and “Rita Ora, I hope you die” are among the sweeter sentiments now clogging her social media accounts.

Twitter recently vowed to improve its policing of hate speech recently. But its commitment is as full of holes as a honeycomb. Loud-mouthed rapper Azaelia Banks got a pass just a few weeks ago after tweeting that former GOP vice presidential candidate Sarah Palin should be gang-raped. That tells you all you need to know about whether the politically correct micro-messaging platform will filter out The Queen’s filthy minions.

So, the next time sanctimonious Hollywood lefties and social justice warriors in Silicon Valley blame the right for uncivil rhetoric and out-of-control online mobs, point them to Beyonce’s raging beehive and tell ’em:

Michelle Malkin is a columnist for WorldTribune.com and the author of the new book “Who Built That: Awe-Inspiring Stories of American Tinkerpreneurs. Her e-mail address is malkinblog@gmail.com.
Buzz off.

Beyonce: Condemning Republicans’ for their unhinged fans, but not ‘Queen Bey’, I’m looking at you, LIFE, Michelle Malkin, WorldTribune.com