Egypt has accused Turkish leader Recep Tayyip Erdogan of supporting terrorists and seeking to provoke mayhem in the Middle East after he questioned the legitimacy of Egyptian President Abdul Fatah Sisi in a speech at the UN General Assembly. 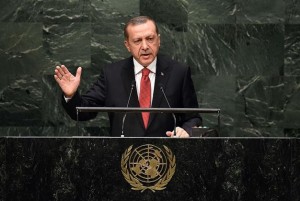 Ties between Ankara and Cairo have been strained since then army chief Sisi toppled elected President Mohammed Morsi of the Muslim Brotherhood last year after mass protests against his rule.

Egyptian security forces then mounted one of the fiercest crackdowns against the Islamist movement, killings hundreds of supporters at a Cairo protest camp, arresting thousands and putting Morsi and other leaders on trial.

After world leaders gathered at the United Nations, Erdogan delivered a speech which featured stinging criticism of Sisi’s rise and what he called inaction after Morsi’s overthrow.

“Again, those objecting (to) the murders in Iraq, Syria and the murder of democracy in Egypt are subjected to certain unfair and groundless accusations and almost immediately accused of supporting terrorism,” said Erdogan.

In a statement, Egypt’s foreign ministry dismissed Erdogan’s comments on Sisi. “There is no doubt that the fabrication of such lies and fabrications are not something strange that comes from the Turkish President, who is keen to provoke chaos to sow divisions in the Middle East region through its support for groups and terrorist organizations,” the foreign ministry said.