I came out of Bataan and I shall return!

I have returned. By the grace of Almighty God, our forces stand again on Philippine soil.

Like Abraham Lincoln, I am a firm believer in the people and, if given the truth, they can be depended on to meet any national crisis. The point is to bring before them the real facts.

Today the guns are silent. A great tragedy has ended. A great victory has been won. The skies no longer rain with death — the seas bear only commerce — men everywhere walk upright in the sunlight. The entire world lies quietly at peace. The holy mission has been completed. And in reporting this to you, the people, I speak for the thousands of silent lips, forever stilled among the jungles and the beaches and in the deep waters of the Pacific which marked the way.

It seems strangely difficult for some to realize that here in Asia is where the Communist conspirators have elected to make their play for global conquest, and that we have joined the issue thus raised on the battlefield; that here we fight Europe’s war with arms while the diplomats there still fight it with words; that if we lose the war to communism in Asia the fall of Europe is inevitable, win it and Europe most probably would avoid war and yet preserve freedom. As you pointed out, we must win. There is no substitute for victory.

I know war as few other men now living know it, and nothing to me is more revolting. I have long advocated its complete abolition, as its very destructiveness on both friend and foe has rendered it useless as a means of settling international disputes … But once war is forced upon us, there is no other alternative than to apply every available means to bring it to a swift end. …

The Japanese people, since the war, have undergone the greatest reformation recorded in modern history. With a commendable will, eagerness to learn, and marked capacity to understand, they have, from the ashes left in war’s wake, erected in Japan an edifice dedicated to the supremacy of individual liberty and personal dignity; and in the ensuing process there has been created a truly representative government committed to the advance of political morality, freedom of economic enterprise, and social justice. Politically, economically, and socially Japan is now abreast of many free nations of the earth and will not again fail the universal trust… I sent all four of our occupation divisions to the Korean battlefront without the slightest qualms as to the effect of the resulting power vacuum upon Japan. The results fully justified my faith. I know of no nation more serene, orderly, and industrious, nor in which higher hopes can be entertained for future constructive service in the advance of the human race. …

While I was not consulted prior to the President’s decision to intervene in support of the Republic of Korea, that decision from a military standpoint, proved a sound one, as we hurled back the invader and decimated his forces. Our victory was complete, and our objectives within reach, when Red China intervened with numerically superior ground forces. …

There are some who, for varying reasons, would appease Red China. They are blind to history’s clear lesson, for history teaches with unmistakable emphasis that appeasement but begets new and bloodier war. It points to no single instance where this end has justified that means, where appeasement has led to more than a sham peace. Like blackmail, it lays the basis for new and successively greater demands until, as in blackmail, violence becomes the only other alternative. …

The tragedy of Korea is further heightened by the fact that its military action is confined to its territorial limits. It condemns that nation, which it is our purpose to save, to suffer the devastating impact of full naval and air bombardment while the enemy’s sanctuaries are fully protected from such attack and devastation. Of the nations of the world, Korea alone, up to now, is the sole one which has risked its all against communism. The magnificence of the courage and fortitude of the Korean people defies description. They have chosen to risk death rather than slavery. Their last words to me were: “Don’t scuttle the Pacific!” ….

I am closing my 52 years of military service. When I joined the Army, even before the turn of the century, it was the fulfillment of all of my boyish hopes and dreams. The world has turned over many times since I took the oath on the plain at West Point, and the hopes and dreams have long since vanished, but I still remember the refrain of one of the most popular barrack ballads of that day which proclaimed most proudly that “old soldiers never die; they just fade away.” And like the old soldier of that ballad, I now close my military career and just fade away, an old soldier who tried to do his duty as God gave him the light to see that duty. 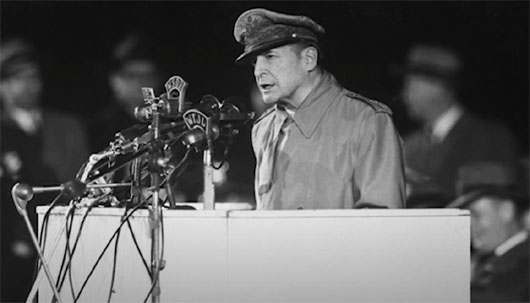 “Duty, Honor, Country” — those three hallowed words reverently dictate what you ought to be, what you can be, what you will be. They are your rallying point to build courage when courage seems to fail, to regain faith when there seems to be little cause for faith, to create hope when hope becomes forlorn… In my dreams I hear again the crash of guns, the rattle of musketry, the strange, mournful mutter of the battlefield. But in the evening of my memory always I come back to West Point. Always there echoes and re-echoes: Duty, Honor, Country. Today marks my final roll call with you. But I want you to know that when I cross the river, my last conscious thoughts will be of the Corps, and the Corps, and the Corps. I bid you farewell.