Has Obama finally exhausted all benefits of all doubts?

Though President Barack Obama’s first term was characterized by anemic economic growth, decreasing household income, prolonged joblessness, an unpopular health law, foreign policy blunders and bitter partisanship, the electorate seemed stubbornly unwilling to lay any of it at his feet. As late as July 2013, 35 percent of Americans assigned George W. Bush a “high degree” of blame for the economy versus only 19 percent who named Obama alone.

Now the spell appears to have been decidedly broken. The benefit of the doubt Obama enjoyed for more than four years has been depleted. 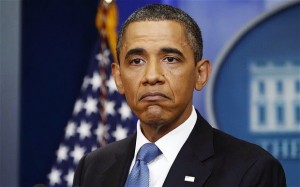 The Benghazi, IRS and Veterans Affairs scandals; the disastrous rollout of Obamacare (and the revelation of presidential dishonesty); the molasses economy; the Syria “red line” fiasco; the feeble response to the Ukraine mess; the new EPA taxes on coal; and the utterly tone-deaf treatment of the Sgt. Bowe Bergdahl trade have combined to convince the country that Obama is out of his depth. A Fox News poll found that 55 percent of voters believe that Obama has made the country weaker. CNN found that 61 percent disapprove of his handling of the economy, along with 63 percent who disapprove of his handling of the health care law, and 57 percent who disapprove of his management of foreign policy (the poll predated the Bergdahl trade).

It’s tempting for Republicans to pocket these poll numbers as if earned. After all, one party’s loss is usually the other’s gain in a two-party system. But however disappointed voters may be with the Obama presidency, Democrats remain more broadly popular than Republicans. Nearly 51 percent of Americans have an unfavorable view of the Republican Party compared with 47 percent who feel that way about the Democrats. Despite the president’s stumbles, the generic ballot for the House still shows a slight edge for Democrats. This doesn’t mean the Democrats have any chance of retaking the House or even improving their share of seats in November, but it does reflect the deep-seated reputations of the parties. While the president’s overall disapproval rating (Washington Post/ABC) stands at 53 percent, Pew found that 68 percent disapprove of the job Republican leaders in Congress are doing.

Margaret Thatcher said, “First you win the argument, then you win the vote,” and quite a few Republicans, both officeholders and policy analysts, are shaking off the intellectual cobwebs that had dulled their approaches to public policy for more than a decade. Many Republicans now recognize that they must propose reforms that speak to middle- and working-class voters, and shed their image as the party of the rich.

The YG Network, originally a creation of House Republican leaders, has offered a blueprint for policy innovation with Room to Grow. The tone is set by Yuval Levin, who notes in his introduction: “Our government has too often been getting in our way rather than helping us along. Many families now face stagnating wages, excessive tax burdens, rising health and higher education costs, barriers to mobility and work, disincentives to marriage and childbearing, and an economy increasingly held back by overregulation, cronyism, institutional sclerosis, and mounting public debt … In each case an overreaching, hyperactive, unwieldy, and immensely expensive federal government lies near the root of the problem.”

The concrete proposals advanced in Room to Grow include a replacement for Obamacare that is modeled on Medicare Part D, “a real marketplace that has restrained cost growth while also yielding high levels of choice and satisfaction for seniors.” There is a proposal for payroll tax relief for families raising children on the grounds that parents pay twice for Social Security and Medicare — once from their paychecks and again because they bear the expense of raising the next generation of taxpayers.

Room to Grow encourages drastic reforms to higher-education funding; competition and choice for K-12 schools; reform of the deadening occupational licensing regimes that inhibit job growth; paring back Social Security Disability Insurance while ramping up the earned income tax credit so fewer people become disengaged from the world of work; ending “too big to fail” for the financial system; a series of steps to reverse the disincentives to marriage buried in federal programs; and other reforms addressing poverty, energy and more.

These reforms won’t please everyone, but if widely touted by Republican candidates and officeholders, they could begin to change the perception that Republicans care only for the rich. If enacted, they could revive not just the party but also the country.