How Benghazi unfolded: A disinformation campaign the KGB could envy

The Ben Rhodes memo revealing the duplicity of this administration on the subject of Benghazi reminds us about the character of those involved. That President Barack Obama could lie so evenly and so passionately (remember the second presidential debate?) is not perhaps surprising at this stage. But let’s not forget what it took for Hillary Clinton to lie to the grieving father of an American hero.

First, a refresher on the facts (as they were certainly known to the principals): 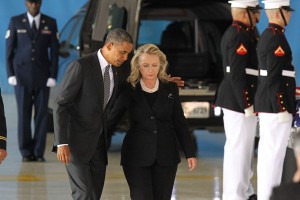 A convoy of well-armed terrorists rolled into the complex housing the American consulate in Benghazi on Sept. 11, 2012. The attackers sealed off streets leading to the consulate with trucks and then commenced the attack on the building using rocket-propelled grenades, AK-47s, mortars and artillery mounted on trucks. Ambassador Chris Stevens called Deputy Chief of Mission Gregory Hicks for help, saying, “Greg, we’re under attack.” Hicks, who was in Tripoli, conveyed this up the line, but no help arrived.

The terrorists killed Stevens and another American and set the building ablaze. (Two more Americans would die later attempting to protect the annex.) As soon as the next morning, Congressman Mike Rogers, chairman of the House Intelligence Committee, described the attack as a “commando-style event” with “coordinated fire, direct fire, (and) indirect fire.” A few days later the Libyan president said that it was a planned terrorist attack.
He also said that the idea it was a “spontaneous protest that just spun out of control is completely unfounded and preposterous.” Yet a well-orchestrated disinformation campaign by the Obama administration managed to put the press off the story and mislead the American people.

The brazenness and scope of the disinformation would make any KGB colonel sigh with admiration. At 10:32 on the night of the attack, Clinton issued a statement deploring violence in response to “inflammatory material posted on the Internet.” In the days that followed, the president and his spokesman repeatedly invoked the supposedly offensive video as the cause of the attack. The president and secretary of state even filmed commercials to play in Muslim countries denouncing the video while also upholding America’s tradition of religious and political freedom. “We reject all efforts to denigrate the religious beliefs of others,” said the president. “But there is absolutely no justification to this type of senseless violence.”

But as the State Department finally disclosed a month after the attack (and as had been widely reported before then), there was no protest outside the American consulate in Benghazi. Nothing. Not a peep.

As the Rhodes memo makes clear, the president sent his U.N. ambassador to the Sunday shows to lie. Susan Rice was “to underscore that these protests are rooted in an Internet video, and not a broader failure of policy.” Rice did as she was told. The election was less than two months away. A foreign policy failure would not be politically convenient, so it would be made to go away. It’s one of the minor injustices of this sorry story that Rice has received more condemnations than the president or secretary of state, who pulled the strings.

Clinton began to peddle the “Internet video” story from the first moments after the guns went silent in Benghazi. When the Libyan ambassador to the U.S. apologized to her on Sept. 13, 2012, for the “terror attack,” she ignored this and burbled on about “the innocence of Muslims.”

The president, vice president and Clinton welcomed the bodies of Stevens, Tyrone Woods, Sean Smith and Glen Doherty to Andrews Air Force Base in Maryland on Sept. 14. According to Woods’ father, the vice president used remarkably offensive locker room talk about the deceased Navy SEAL, but Clinton stayed on message. She greeted the man whose son had bravely attempted to fight off far more numerous and better-armed terrorists on the roof of the CIA annex and who gave his life. Did she praise the courage and self-sacrifice of the decorated Navy SEAL? Did she express regret that he had been left nearly alone to fight off the Islamist terrorists? No. Not even the flag-draped coffins spread before Clinton could shake her iron determination to stick with the script.

She told Woods they would catch the guy who made the Internet film and make sure he was punished.

Most politicians are capable of stretching the truth on occasion. But this question, this setting and this egregious a lie suggest that Clinton’s conscience — if she ever had one — is growing flaccid from disuse.