How to stop the killing: Pull the plug on publicity

The latest mass-casualty shooting spree — this one in Santa Barbara, California — has touched off the usual debate about how to put a stop to these hideous spasms of murder. These random massacres have become, as I wrote in a previous column, an American psychosis.

Some, including the anguished father of one of the victims, point to guns and the National Rifle Association as the villains. Defenders of guns respond with the usual arguments — which I find persuasive. That much having been said, I wish people who defend the Second Amendment wouldn’t talk about their guns with such lascivious pleasure. Guns are necessary to self-defense. The right to own them is enshrined in the Constitution. Enough said. 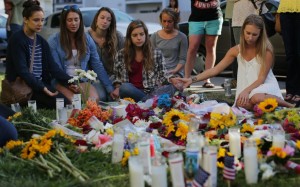 Let’s not worship them. Gun worship — by the Hollywood left which uses it to sell tickets, and by the conservative right, which fetishizes guns — are both part of our national problem.

Some criticize our overly libertarian approach to mental health treatment as partially to blame for the murderous rampages we’ve suffered. I’ve made this point many times. Critics respond that a focus on the mental health status of shooters can contribute to an unfair stereotyping of the mentally ill. Jeff Deeney argues in The Atlantic that involuntarily committing someone for mental health treatment can be an unpleasant as well as arbitrary process.

Some young women have responded to the shooter’s fury about his sexual frustration and loneliness with a focus on misogyny. “Many women interviewed on this sun-splashed campus,” the New York Times reported, ” … said they believed that some of the attitudes toward women expressed by the gunman … in his perverse manifesto of rage and frustration reflect some views that are echoed in the mainstream culture.”

When a gunman mows down innocent people, isn’t it missing a step to interpret this as a gender equality issue? Mental illness to one side, doesn’t it suggest a basic moral collapse?

Let’s talk about what’s realistic: This country is not going to restrict guns in any serious way. Even if new laws were passed closing down every gun shop and show in the country, a) they wouldn’t pass constitutional muster, and b) an estimated 310 million guns would remain in circulation.

Violent TV, movies and video games are protected by the First Amendment, and are probably too broadly popular to curtail, though I suspect that we’d have a gentler society if we entertained ourselves with less gore and blood.

We should reform our mental health system, including changing our standards for short-term involuntary commitment and instituting assisted outpatient treatment. But progress is bound to be slowed by civil libertarians and others who will insist that the right to refuse treatment (even among those too sick to make rational choices) is sacrosanct.

Women should worry about misogyny. They should also worry about the decline of family stability, which has produced more deracinated young men raised without the anchoring presence of a good father. Divorce and multiple relationships by adults, especially when children see many adults come and go before they reach the age of 18, are associated with higher rates of stress and mental illness in children.

But the problem of family dissolution isn’t going to be easily addressed either.

There is one reform that could be adopted immediately, that would cost nothing, and that might have an impact on the American psychosis: The press can choose not to publish the names or show the faces of shooters.

A quick survey of popular news sites in the days following the Santa Barbara atrocity showed that all used the name of the murderer. The New York Post, CBS News, The Huffington Post, The New York Times, ABC News, TMZ and the Washington Post all used the man’s name, showed his face or both. The Post was perhaps the worst offender, publishing the shooter’s “manifesto” as well on its website.

In a celebrity-drunk culture like ours — one that, moreover, frequently makes no distinction between those who gain fame for good reasons and those who deserve infamy — invites the unbalanced to bid for attention with huge crimes. In the shallow world of news sites and social networks, everyone jockeys for attention. All the petty egos stretch for their moment of glory. The YouTube video apparently filmed by the killer was the ultimate “selfie” guaranteed to reach a mass audience.

Pull the plug on the publicity machine for killers. It’s cost-free. It’s easy. It can be done immediately, and it might very well remove one of the chief lures of the killing spree.