If you could spare a moment, Mr. President, a few questions please

At your press conference, you said, “It is in our national security interest not to see an all-out civil war in Iraq.” If that is the case, why did you withdraw all U.S. forces from Iraq in 2011? Were you motivated by something other than U.S. national interests? 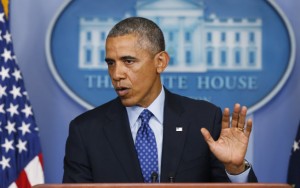 Did no one advise you that the current disaster was possible when you proclaimed in December 2011: “We’re leaving behind a sovereign, stable and self-reliant Iraq with a representative government that was elected by its people. We’re building a new partnership between our nations. And we are ending a war, not with a final battle, but with a final march toward home. This is an extraordinary achievement, nearly nine years in the making.”

If it is in the U.S. national security interest to keep Iraq from disintegrating, why are you deploying at most 300 special forces — just 50 more than you sent to find and destroy Joseph Kony of the Lord’s Resistance Army in Uganda? Does Kony represent a comparable threat to the United States in your judgment?

You said two things that seem contradictory — that “U.S. troops are not going to be fighting in Iraq again” and that you would consider “targeted and precise” military action. Which is true?

You said that you were sending Secretary of State John Kerry to consult with countries in the region, because all of Iraq’s neighbors have a “vital interest” in ensuring that Iraq does not “descend into civil war or become a safe haven for terrorists.” Who were you referring to? Saudi Arabia has been arming the opposition to Bashar Assad, and doubtless some of those arms have fallen into the hands of the terrorist group ISIL, which operates in both Syria and Iraq.

Do you think the Saudis will be swayed by anything Kerry has to say after they’ve flamboyantly expressed their disgust with your leadership?

Did you mean Jordan, which is currently struggling with more than 600,000 Syrian refugees? Jordan certainly wants a stable Iraq, but Jordan is among the weakest states in the region. If Jordan did everything in its power to stabilize Iraq, it would make little difference.

Were you thinking of Iran? Where to begin? Iran pulls Assad’s strings, and it is Assad who released the leadership of ISIL from his jails precisely to radicalize the opposition to his rule. He wagered that you would find it difficult to help the rebels if they were associated with extremists.

ISIL is, in a sense, Iran’s achievement, not Iran’s problem. Iran is also the chief sponsor of Nouri al-Maliki, the failed Iraqi leader whose disastrous leadership has helped propel Iraq to this crisis. Do you believe that Iran has a vital interest in ensuring that Iraq is not a haven for terrorists? Really? Iran has devoted itself tirelessly since 1979 to creating and supporting terrorists around the globe. Iran created Hezbollah. Iran created the Al-Quds force that killed countless Americans in the Iraq War, assisted terror attacks in India and South America, and plotted to blow up the Saudi ambassador at a Washington, D.C., restaurant.

You said, “Above all, Iraqi leaders must rise above their political differences and come together around a political plan for Iraq’s future.” Does this “must” have the same force as your earlier call for Bashar Assad to step down? What about your statement that “the future of Ukraine must be decided by the people of Ukraine” just a couple of weeks before Russia annexed Crimea?

Do you think it is easier for factions within Iraq, wracked by tribal rivalries, ethnic divisions, religious differences, a history of tyranny, and amid a crisis featuring armies marching and beheadings by the hundreds to “rise above their political differences” when you cannot bring yourself to negotiate sincerely with Republicans about the national debt or spending?

You scolded President George W. Bush — by implication — during your remarks when you said that the present crisis should remind us of “the need to ask hard questions before we take action abroad, particularly military action.” Did you ask hard questions before making the decision to withdraw all forces from Iraq, or were you more interested bragging rights about “ending wars”? Do you see now that the enemy gets a vote?