Manliness: The unsung trait of the train heroes

When a heavily armed man emerged from the bathroom of a European train and began what was clearly intended as a massacre of innocent, unsuspecting civilians, six men ranging in age from 22 to 62 sprang into action.

A banker and a middle-aged academic, both French, were first on the scene. The sound of gunfire awakened three young American tourists: Alek Skarlatos, Spencer Stone and Anthony Sadler. In a moment evocative of the Flight 93 passengers’ shining courage on 9/11, Skarlatos saw Ayoub El-Khazzani struggling with one of his guns and leapt up, saying simply “Let’s go” to his friends.

The three Americans, two Frenchmen and one Briton who took on the terrorist were unarmed — though, thank God, in the case of two (the third was fit, too), their military training prepared them for violence. That’s right. For the world to be safe for most people, good people must learn the arts of war to prevent bad people from ruling through terror. It’s true of individuals, and it’s true of nations. 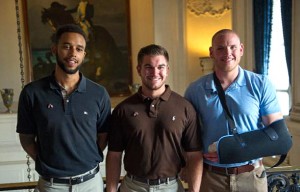 The Legion d’honneur is both richly deserved and a reminder that honor, so out of fashion in our time, is awfully handy in emergencies. Stone, already slashed in the face and neck by the terrorist’s knife and with this thumb nearly severed, nevertheless went to the aid of Mark Moogalian, who was bleeding badly from a bullet wound and probably would have died without Stone’s assistance. The others, Sadler, Skarlatos, Chris Norman and an unnamed Frenchman, subdued and tied up the terrorist, while Stone saved Moogalian’s life.

There is more to say about the three Americans. They were childhood friends who met at a Christian middle school. They are of different races, but despite the impression you’d get from the current tone of national politics, that was irrelevant to their friendship. They also seem to have been rambunctious boys — a trait that tends to be pathologized in modern America. The Sacramento Bee recounts:

“Friends from age 7, they played with their siblings and neighbors up and down Woodknoll Way, favoring games such as Airsoft, in which participants shoot each other with realistic-looking replica guns that fire plastic pellets, said Peter Skarlatos, Alek’s older brother…

“‘We’d basically turn this neighborhood into a war zone,’ the brother said, sitting on the shady front porch of his family’s ranch house Sunday afternoon. ‘Spencer and Alek were all action-oriented kinds of guys.'”

When I was raising three boys, I received a few looks askance for permitting them to use play guns and to imagine themselves as soldiers. Some of the more sensitive parents in our area disapproved of the “Power Rangers,” a cartoonish show featuring teenaged superheroes battling goofy villains. These parents sincerely believed that we must suppress all violent tendencies in our children, especially our sons, to make a gentler world. Our boys relished the “Power Rangers,” with our blessing.

I believed then and still do that violent urges cannot be completely quashed, but they can be channeled into virtuous expression. There is all the difference in the world between using violence aggressively and using it defensively. As Bill Buckley used to say: One man pushes an old lady into the path of a truck. Another man pushes her out of the path of the truck. Are we to say there’s no difference between them because they both push old ladies around?

There’s one more thing to be said of the heroes on the train. They were men. So-called “traditional masculinity” is a major target of feminists on college campuses and elsewhere. That, they teach, is what creates the “rape culture.” The Obama administration has joined in (naturally). A government website urges that colleges “promote an understanding of the ways in which traditional masculinity contributes to sexual assault and other forms of men’s violence against women.”

In Aurora, Colo., in 2012, when a crazed gunman opened fire on a crowded movie theater, no fewer than three young men covered their girlfriends with their own bodies and lost their lives in the process. That, and not the loutish behavior of some frat boys, is true “traditional masculinity” — or better, manliness.

Men have been defamed and devalued in our society for decades. Their high spirits are punished in schools. Their natural protectiveness has been scorned as sexism.

The passengers on that French train are surely grateful that some manliness remains indomitable.