Now that the scandal’s over, will VA services improve?

Here’s a not-so-bold prediction: After the press loses interest in the Veterans Affairs scandal, after the investigations have been completed and one or two officials have resigned, nothing will change. 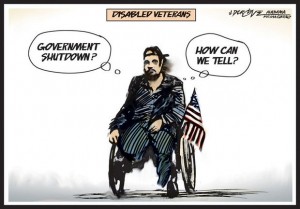 Is this cynicism? Not really. It comes down to one’s view of how much government can achieve by bureaucratic, top-down management.

The progressive project has limitless faith in the capacity of wise managers to run complex systems for the benefit of all. Untainted by the profit motive, bureaucrats can deliver services equitably and efficiently. Every liberal/progressive program has the effect of taking decision-making away from individuals, communities and local governments, and centralizing it in Washington.

President Barack Obama has doggedly championed this approach. His admirers, who share his belief in the power of central management, have noticed that there have been lapses on his watch. Doyle McManus of the Los Angeles Times summarized the disillusioned progressives lament thus:

“The biggest problems Obama has faced in the White House … have come not from making policy but from trying to implement it. The calamitous launch of his healthcare plan last fall is the biggest and most painful example …
“The 2009 economic stimulus plan’s ‘shovel-ready’ projects that took months to start, the confused response to the 2010 BP oil spill, the flap over IRS scrutiny of conservative organizations, even the State Department failures that led to the deaths of four Americans in Benghazi in 2012 — all were mainly lapses in management, not policy.”

Obama, McManus concludes sadly, is a “skilled politician and speechmaker but a lousy manager.”

It’s certainly true that Obama is a poor manager. He isn’t interested in the nuts and bolts of policy implementation. He prefers to strike poses. He makes pronouncements like: “If these allegations prove to be true, it is dishonorable, it is disgraceful, and I will not tolerate it. Period.” (You’d think by now he’d avoid the intensifier “period.”) As with his comments about the IRS scandal, and “If you like your doctor … ” and Benghazi, and the Justice Department targeting journalists, the important thing is to get the affect right, not to solve problems or take responsibility. It’s unacceptable and a disgrace and no one is angrier than he … and what’s on “Game of Thrones” tonight? Maybe he should pose for a photo holding a sign saying “#ManageOurGovernment.”

Even if Obama were the best manager in the world, the problems with efficient service delivery by government would continue — because the government is too large, too unwieldy and too lacking in incentives for efficiency to yield much, if at all, to management. A business that fails to deliver services will be crushed by its competitors. Government can never go out of business.

At the Veterans Affairs, bureaucrats lied and cooked the books regarding the care they were providing veterans. Eight cardiologists at the Albuquerque, New Mexico, facility, The Daily Beast reports, saw the same number of patients in a week that a single cardiologist in private practice sees in two days. According to the inspector general’s report, long wait times, poor service and deceit are “systemic” throughout the system. Some veterans may have died for lack of timely treatment.

Care for another headline guaranteed to recur? “Senate Chair: Fix Dysfunctional Indian Health.” That’s an Associated Press story about the Indian Health Service, tasked since 1955 with delivering free medical care to 2 million Native Americans. Former Sen. Byron Dorgan found that a “chronic state of crisis” plagued the service, featuring “a lack of providers, hospitals at risk of losing their accreditation, improperly licensed staff, and missing or stolen narcotics.” A spokesman for the Assiniboine and Sioux tribes of northeast Montana’s Fort Peck Indian Reservation told the Journal Gazette: “All too often, tribal members complain of ailments but get sent home from the Indian Health Service with cough medicine or pain killers. Later we learn the situation is much more serious, like cancer.”

Progressives respond that the IHS is simply underfunded — as they regard every federal program except the military. But even Democratic Sen. Jon Tester of Montana found when he examined problems with the IHS that at least one provider was seeing only one patient per day.

It isn’t management; it’s a matter of incentives. No central authority can make a system like the VA or the IHS or Britain’s National Health Service run efficiently. Competition is the only system that gives the power to consumers to reward good service and punish bad. But progressives cannot shed their faith that more government is the answer to bad government, so this story is sure to be repeated.