A source tipped me off last week to a curious occurrence: It seems that two planeloads of illegal aliens were recently shipped to Massachusetts.

The first reportedly landed at Hanscom Air Force Base in Bedford. According to my tipster, approximately 160 illegal immigrants arrived on that flight and stayed nearly a week before being transferred to a Department of Homeland Security site and then released.

The second flight reportedly was diverted from Hanscom to Boston’s Logan Airport this past weekend. I am told that both Massachusetts and New Hampshire officials were on hand. I reached out to Hanscom AFB for confirmation, but did not receive a call back by my deadline. 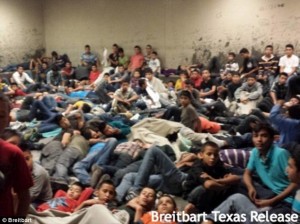 Question: How many other military bases are stealthily being used to redistribute, house, process and release illegal border crossers?

What we do know for sure is that the Obama administration already has converted several other military bases across the country into outposts for tens of thousands of illegal aliens from Central and South America.

San Antonio’s Lackland Air Force Base opened its doors as an illegal immigrant camp last month. Port Hueneme Naval Base in Ventura County, Calif., will shelter nearly 600 illegal border-crossing children and teens. The Fort Sill Army post in Lawton, Okla., was ordered on Friday to take in 1,200 illegal aliens despite the objections of GOP Gov. Mary Fallin, who blasted the White House, saying, “The Obama administration continues to fail in its duty to protect our borders and continues to promote policies that encourage, rather than discourage, illegal immigration.”

A makeshift detention center in Nogales, Ariz., is being used as the central clearing station for the latest illegal alien surge. The deluge is a threat to national security, public safety and public health — not to mention a slap in the face to the law-abiding men and women in uniform on those bases and a kick in the teeth to law-abiding people around the world patiently waiting for approval of their visas.

Meanwhile, a law enforcement source in Texas tells me this week that countless illegal aliens are being released into the general public despite testing positive for tuberculosis. “The feds are putting them on public transportation to God knows where,” he said.

Another source, working in the border patrol in south Texas, tells me: “Our station, along with every other station, is flooded with women and small children. One lady yesterday had a baby as young as 8 months. And they’re coming over with pink eye and scabies. So getting them medically cleared becomes a priority. They’ll be here for almost a week, so we provide them with formula and diapers. We have a catering service contracted to feed them because it’s too many for us to feed on our own. And of course, they end up being released because every family housing facility is full. They’re supposed to show up for immigration court at a later date, but they don’t.”

Same old, same old. I’ve reported for years on the feds’ catch-and-release games and deportation Kabuki. The “notice to appear” letters — known as “run letters” — are a notorious joke in open-borders circles.

The latest “crisis” is a wholly manufactured byproduct of White House administrative amnesties, which are supported by a toxic alliance of ethnic-vote-seeking Democrats and cheap-labor-hungry Big Business Republicans.

The flood comes just as Obama’s DHS announced a two-year extension for beneficiaries of the “Deferred Action for Childhood Arrivals” (DACA) program. A whopping 560,000 illegal aliens have been granted amnesty under DACA and also have received employment authorization.

And where’s the GOP “leadership” in this country? Doing the bidding of the amnesty-loving U.S. Chamber of Commerce and demonizing Republican candidates at every level who are sick and tired of giving away the store and the country.

God save us from bipartisanship.