Whole doctoral dissertations could be devoted to the question of what makes President Obama angry and what does not. His Tuesday broadside against Donald Trump stood in marked contrast to Sunday’s somewhat-cold response to the Orlando massacre. This is a pattern.

Mr. Obama did not name Trump, referring to him only as a “politician who tweets and appears on cable news shows.”

I’m not inclined to defend Trump, and will not do so now; his notion that we bar all Muslims from traveling to the United States is laden with unintended consequences. 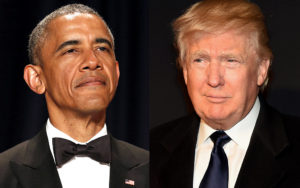 But President Obama’s studied refusal to acknowledge the reality of Islamic-inspired violence has helped to create the Trump phenomenon. In fact, it may well be the greatest contribution to Trump’s success. Some say that presidential elections are often referenda on the last guy: Carter was the anti-Nixon; Reagan was the anti-Carter; Clinton was the anti-Bush; and Obama was the anti-Bush. Thus, Trump is the anti-Obama.

Obama fumed at those who criticize his administration for refusing to use the words “radical Islam.” He mocked the idea that language matters: “Not once has an adviser of mine said, ‘Man, if we use that phrase, we are going to turn this whole thing around.’ Not once.” He never tires of slaying straw men. It’s not a matter of intoning magic words. The critique of Obama is that he has so often projected the image of Islam’s defense counsel instead of America’s commander-in-chief.

In fairness (though Obama is rarely fair to those he differs with), it should be noted that George W. Bush was also at pains to shun the impression that the U.S. was at war with Islam.

But here’s the difference: Bush never gave the impression that he wasn’t on America’s side, and Obama consistently does. Moreover, when Obama or members of his administration stubbornly refuse to acknowledge what everyone knows to be true, it makes people feel unsafe.

Attorney General Loretta Lynch expressed the administration’s view succinctly when, after San Bernardino, she confided that her “greatest fear” was of an anti-Muslim violent backlash in the United States. That has ever been the president’s chief worry as well, though there has been precious little justification for it.

Ironically, Obama has helped to make such a backlash more likely in the future. By steadfastly refusing to make distinctions among Muslims based upon ideology and conduct — by insisting that Muslims are no more plagued by violent extremism than, say, Presbyterians — he has opened the door to Trump, who also makes no distinctions.