Are you ready because Hillary Clinton’s tenure as secretary of state was such a rousing success? 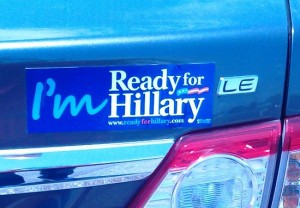 As of this writing, Islamist forces are marching south from newly conquered Mosul and Tikrit in Iraq. Wasn’t Clinton the chief architect of our foreign policy when we failed to negotiate a status-of-forces agreement with Iraq in 2011? Reviewing that history in September of 2012, The New York Times quoted an administration spokesman: “As we reviewed the 10,000 option, we came to the conclusion that achieving the goal of a security partnership was not dependent on the size of our footprint in-country, and that stability in Iraq did not depend on the presence of U.S. forces.”

That worked out well.

When asked in April what she was most proud of in her term, she squirted a lot of ink about preventing another Great Depression and “stabilization” and “positive growth,” adding: “I think we really restored American leadership in the best sense. That, once again — people began to rely on us as setting the values, setting the standards.”

With which country are relations better now than in 2009? Canada? Israel? Britain? We’ve rebuffed and insulted Canada by failing to approve the Keystone XL pipeline, bullied and alienated Israel, betrayed Poland and the Czech Republic on defensive missiles, and insulted Great Britain by, among other things, sending back Winston Churchill’s bust.

Has the U.S. position improved vis-a-vis adversaries? Is Clinton proud of the Russia “reset”? It began with a gaffe when she, in a stunt that would have been puerile even if it had gone right, presented to the Russian foreign minister a button that was supposed to say “reset” in Russian. Instead, it said “overcharge.” Since then the President Barack Obama/Clinton policy toward Russia has been marked by Vladimir Putin running rings around the U.S. while the president issues clueless rebukes to critics about the Cold War being over.

The surge in Afghanistan was unsuccessful and is now to be followed by unilateral withdrawal. Iraq’s fragile peace is collapsing, even as a revived al-Qaida stands ready to dominate large swaths of Syria, Iraq, Afghanistan and Lebanon. Libya is heading for civil war. Benghazi, Clinton admits, is a regret. China is throwing its weight around in Asia. America’s global popularity declined steeply during her tenure.

Perhaps none of this is actually Clinton’s fault. Obama explained in 2008 that he was: “a better speechwriter than my speechwriters … I know more about policies on any particular issue than my policy directors. And I’ll tell you right now that I’m going to think I’m a better political director than my political director.” So maybe Clinton’s advice wasn’t heeded. Or maybe she’s an empty suit who saw the post as a way to pad her resume rather than advance our national interests.

I doubt the lady who sported the “Ready for Hillary” bumper sticker was thinking of Clinton’s record as secretary of state. No, the rationale for the Clinton candidacy is the heart and soul of the progressive project — identity politics. It isn’t what you can do or have done, it’s which box you can check on the approved victim scorecard. The “first woman president” was trumped in 2008 by a superior victim claim, but now, unless a black woman candidate should materialize, Clinton holds the high card.

She may not know how to avoid pitfalls like saying she and Bill Clinton were “broke” when they left the White House, but Hillary knows how to bow the “woman” violin. To extricate herself from the embarrassing stories about her wealth, she wasn’t above knifing her former rival/boss. The Obama campaign, she’s begun telling interviewers, was riddled with sexism. Why, they asked her to criticize Sarah Palin! If you can buy Hillary — who mercilessly trashed every woman who stepped forward to accuse Bill Clinton of harassment — as a stalwart defender of Palin in the name of female solidarity, you’ll buy anything.

Hillary Clinton has nothing to offer the country except her sex. She managed to parlay her status as wronged spouse into a Senate seat, and to leverage her status as failed presidential candidate into the job of secretary of state. She now plans to milk her status as unsuccessful secretary of state into the presidency. She isn’t an example of female accomplishment so much as the Peter Principle — that is, people will be promoted until they reach their “position of incompetence.”