Sarah Palin mocks media: ‘Hey! Hillary’s brain is off-limits . . . You can’t probe a woman like that’

Sarah Palin on Monday mocked the media and liberals for the way they reacted to Republican strategist Karl Rove’s recent questions about the health of Hillary Rodham Clinton…[:] 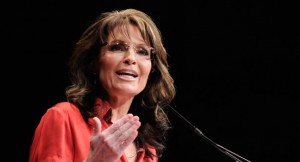 “Hey! Hillary’s brain is off-limits! Leave her health records alone! Democrats are right – scouring records of a female candidate is just politics of personal destruction, and for the media to engage in it would be unfair, unethical, and absolutely UNPRECEDENTED. You can’t probe a woman like that because, well, it’s a war on women!” Palin wrote in a deeply personal post on her Facebook page. …

The former Alaska governor and 2012 Republican vice presidential nominee accused liberals of applying a “double standard” to her and Clinton, citing items about those who suggested she was not the mother of her son Trig. …

Palin concluded her post by slamming journalists[:] “With enormous issues to debate before choosing a Presidential/Vice Presidential ticket, have confidence no mean-spirited salaciousness will be pushed by ‘real journalists.’ Nope. This just doesn’t happen at this respectable level of American politics. Just ask me. And Trig,” she said sarcastically.