As there is too much to say in the space of one column, I will simply offer some thoughts on the state of the country a week after the 2020 elections.

No. 1: While I am not certain the reported election results are dishonest, I suspect they are. Worse, about half this country believes this, too.
This is unprecedented in American history. 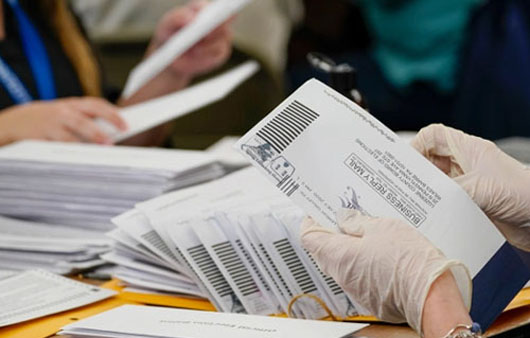 One might counter that this is not unprecedented, that this was precisely what half the American electorate felt in 2000, when many Democrats rejected the 2000 Supreme Court decision regarding Florida’s ballot counting. But that was entirely different. No one alleged widespread Republican fraud in the election of George W. Bush. The issue in that extremely close election involved a faulty voting system that resulted in hand recounts using differing ballot-counting standards from one jurisdiction to the next. Liberal justices joined the 7-2 vote in ruling for Bush that the recounts could not constitutionally go forward.

Therefore, the fact that nearly half the country is far from certain that Joe Biden was honestly elected is unprecedented.

Half this country believes, with good reason, that if Democratic Party officials believe they can get away with cheating, they will do so. Aside from the Democrats having a history of ballot-manipulation, there is an even more compelling reason to believe Democrats would cheat. For four years, they have been telling the nation and telling one another that President Donald Trump is a dictator, a fascist and a white supremacist. Therefore, if a leftist considers himself a moral individual and works in tabulating election results, and he can help prevent the reelection of a white supremacist fascist dictator, wouldn’t he do so? Wouldn’t he be morally obligated to do so?

No. 2: For four years, the mainstream print and electronic media waged daily, indeed hourly, vicious attacks on Trump as a human being. Rarely did they attack his policies, since they were so beneficial to America (some of the greatest economic figures in memory and the lowest black unemployment rate ever recorded) and to the world (a major weakening of Iran and a major strengthening of Israel and Israel-Arab peace). Worse, the media and the Democratic Party immersed the country in a three-year lie about Trump campaign collusion with Russia.

Yet, 70 million Americans still voted for Trump. The Democrats lost seats in the House and will probably not gain control of the Senate, despite the larger number of Republican incumbents who were up for reelection.

Americans watched Democratic governors and mayors do nothing as left-wing thugs burned their cities. And then they watched Democratic mayors and city councils defund their police departments. That is one reason Democrats fared so badly.

No. 3: The mainstream media is now perceived as fraudulent by half of America. This has never been the case. But from The New York Times’ mendacious claim that America’s true founding was in 1619 and was founded in order to preserve slavery — for which the equally dishonest Pulitzer Prize committee awarded the paper a Pulitzer Prize — to the entire mainstream press’s ignoring of the Hunter Biden laptop scandal, only left-wing Americans now believe the mainstream media.

No. 4: That is one reason the tech companies shut down conservative voices. The more people hear non-left ideas, the more they gravitate away from the Left. As a result, for the first time in American history, free speech is seriously threatened— not by government, but by private companies. Free speech is the most important freedom of all. If we lose it, it is the end of our country. What may happen then is the division of America, either formally or informally, into two nations, each with its own media and its own schools.

No. 5: Despite four years of being accused of racism and xenophobia, Trump increased both his black and Latino vote. If Trump lost honestly, it was due to his loss of the white male vote — from +31 in 2016 to +23 in 2020.

No. 6: The Democratic Party was once liberal. It is now leftist. And the Left, everywhere in the world, suppresses dissent wherever it takes over — from Lenin to the modern American university to Twitter and the rest of Big Tech.

No. 7: Liberals loved America. The Left loathes it. Therefore, since the Left governs American education, America-hatred dominates the education system from kindergarten to graduate school. You are risking the poisoning of your children’s minds, souls and consciences by sending them to most American schools and nearly all American colleges. Don’t. Home-school, or find a school that teaches rather than indoctrinates.

No. 8: Hydroxychloroquine, one of the safest and oldest medications known to man, when given with zinc to almost anyone as soon as the individual develops symptoms or tests positive with COVID-19, prevents death and even hospitalization in the overwhelming majority of cases. History will likely note that the politicians and scientists who opposed hydroxychloroquine have a lot of blood on their hands.

No. 10: All over the country, stores in big cities were boarded up solely to protect themselves from left-wing rioters should Trump have won. When Biden was declared the winner, the boards came down. Because everyone knows that conservatives don’t riot.

No. 11: If Biden wins, more and more nonleft Americans will lose their reputations, their businesses and their freedom to speak.
All of which plausibly renders the Georgia runoffs for U.S. senator the most important elections in American history.