Stop scaring the children: After all we need them to save the planet

A friend of mine’s third grade daughter came home from school a few weeks ago with tears streaming down her cheeks. “My teacher says we only have 10 years before the oceans rise and we are underwater,” she moaned. “Are we all going to die?”

That’s a heavy burden to place on the shoulders of a 9-year-old.

Gloomy stories of the coming apocalypse have become commonplace in schools, textbooks, churches, movies and even children’s bedtime stories. The Wicked Witch of the West and Darth Vader have been replaced by the oil corporations and auto company CEOs. 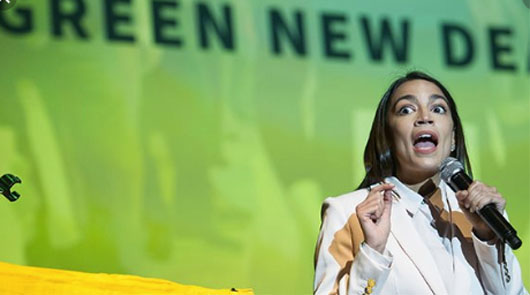 This over-the-top campaign of doom is clearly affecting the psyches of the young. We saw an example just last week when Greta Thunberg, the 16-year-old Swedish girl, gained international publicity by passionately telling a United Nations panel: “Entire ecosystems are collapsing. We are in the beginning of a mass extinction.” She says we have only 8 1/2 years left.

This poor girl, whom some are saying triumphantly is the voice of her generation, sounded terribly frightened. Who filled her head with these morose beliefs that the end is near?

Then there is Rep. Alexandria Ocasio-Cortez of New York, the 29-year-old voice of the millennials in Congress, whose message is that the baby boomers have ruined the planet for her generation.

She says we have 10 years left to head off planetary destruction. We have apparently returned full circle to the early days of humankind when life on Earth was described by Hobbes as “nasty, brutish, and short.”

The only difference is that even the Neanderthals had more than 8 1/2 years of survival in front of them.

Of course, there are major challenges for the younger generations, as there have been in every age since man appeared on the planet. My parents had to overcome polio, the Great Depression and Nazi Germany. When I was a kid, we had to practice bomb drills in school because of fear of Soviets dropping nuclear bombs that would wipe out whole cities.

But to fill the young with false fears of “mass extinction” and so on is to ignore the true state of the planet. It isn’t dying. The young should be celebrating what every objective measure shows: They are living at the greatest moment in the history of the globe.

For those under the age of 30, listen up: You will live longer, healthier lives with more material wealth than any previous generation. You will inherit a world with less poverty, less disease, more leisure time, less pollution, less discrimination and more opportunity to achieve your dreams and aspirations than any other generation — except for your children’s and grandchildren’s.

You are not inheriting a severely injured planet but one in which a storehouse of thousands of years of accumulated human knowledge makes you capable of combatting almost any conceivable problem or catastrophe.

The whole history of modern times is for human ingenuity, innovation and technological know-how to combat the challenges that mankind confronts. If you think global warming is a challenge, thank God you don’t have to deal with smallpox, typhoid, tuberculosis, polio or the plague. The black death in Europe killed about 1 of every 4 residents. Now, (SET ITAL)that(END ITAL) is an apocalypse.

What the young lack today is perspective.

AOC thinks she has problems? It wasn’t so long ago that as many as 1 in 10 women died while giving birth.

I always marvel that the “woe is me” refrain from the young today is often recited as they tap on their $600 iPhones (charged with the electric power they want to do away with) and they carry around their caramel lattes from Starbucks. I tell my kids that without fossil fuels, they may not have power for their computer games. That gives them pause.

As for the trends on toxic air pollution, as recently as a century ago, cities from London to Pittsburgh to Mexico City to Los Angeles were filled with dark and dangerous clouds of smog that choked people’s lungs and prevented the sun from shining. These pollution levels have fallen by 50%, 70% and even 90%.

Children are now taught that cars are evil polluters and that the combustible engine needs to be abolished. Really? When Henry Ford started rolling his Model T’s off the assembly lines 100 years ago, he was heralded as the greatest environmental savior in the history of the planet. Why? Because cars replaced horses — which dropped many tons of toxic manure into the city streets. Imagine the deplorable conditions of Los Angeles today if you had 3 million people riding around on horses.

It is sadly ironic that the greens who want to save the planet are also the ones that turn to the intellectual dead end of socialism and statism to fix things.

The young like to cite the “scientific consensus” that climate change will be catastrophic. Maybe. But 30 years ago, scientists warned of overpopulation, food shortages, energy scarcity and even mass starvation. All of these scares were combatted through innovation and progress.

Bad things happen. Sometime in the coming centuries, an asteroid could plunge into the planet, some new version of the plague could afflict us, or the big earthquake could devastate California, causing millions of deaths. Who knows?

What we do know is that as we grow richer and wiser, we will be better equipped with the resources and the brainpower to deal with catastrophes than any previous generation since the dawn of time.

Our responsibility as parents, teachers, clergy and lawmakers is to teach the children how to solve problems effectively, not to preach the end of the world.

America’s millennials will inherit from my generation some $100 trillion of wealth — a bigger treasure chest of knowledge and resources than all other preceding generations’, combined. How about some gratitude?

If the planet continues to warm and the oceans rise, you have the creativity, the brainpower and the tool chest to figure out the solution. I don’t know what that will be, but I do know that the solution isn’t moving us backward in time to the pre-industrial and pre-energy age — when life was pretty rotten.

I’m an optimist and a realist. This next generation will figure it out. They will save the planet from extinction. And the really good news is there’s a lot more than 8 1/2 years to come up with the right solutions.

Stephen Moore, Stop scaring the children: After all we need them to save the planet, WorldTribune.com