I first read Thomas Sowell in college — no thanks to my college.

At the majority of America’s institutions of “higher learning,” reading Thomas Sowell was a subversive act in the early 1990s when I was a student. It remains so today.

Why? Because the prolific libertarian economist’s vast body of work is a clarion rejection of all the liberal intelligentsia hold dear.

Among the left’s most corrosive ideas is the concept of perpetual and permanent racial victimhood, which social engineers pretend to rectify through federally mandated, taxpayer-subsidized preferential policies. Sowell’s groundbreaking academic analyses of these programs in the U.S. and around the world exposed how elites profit mightily at the expense of the alleged beneficiaries of government-coerced affirmative action. 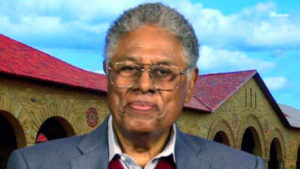 The grand rhetoric of diversity masks the true intent and actual impact of current racially discriminatory “solutions” to past racial discrimination: solidifying the power of the few over the many. As Sowell put it succinctly in one of the first pieces of his I came across in the journal “The Public Interest”:

“Live people are being sacrificed because of what dead people did.”

In that essay and much more deeply in his book, “Preferential Policies: An International Perspective,” published that year, Sowell explored the “mismatch” effect in the ivory tower. While prestigious schools such as the University of California, Berkeley congratulated themselves for manufacturing “wonderfully diverse” student bodies ostensibly to make up for the legacy of American slavery, (which Sowell pointed out was in no way unique to either the American South or blacks), he reported that more than 70 percent of black students at UC Berkeley failed to graduate.

“What they’ve effectively done” in lowering academic standards by race in the name of social justice, Sowell explained in an interview with C-SPAN’s Brian Lamb, “is rented these bodies for window dressing for a few years, and then, when they’re through with them, they’re put aside and a new bunch of bodies are brought in.”

Who benefits? Not the students, but the bean-counting administrators and political correctness marketers at Berkeley — Diversity, Inc. — who exploit minority students for their glossy admissions brochures. The other vested interest? Tenured radicals in what Sowell called the “black studies establishment” who “need students to be in their classrooms” to justify their paychecks.

Sowell, who grew up black and poor in Harlem, worked as a delivery man, served in the U.S. Marines, graduated from Harvard Law School, earned his Ph.D. in economics at the University of Chicago, and fully realized the folly of Marxism during a stint as a federal government intern, spurned identity politics collectivism.

“Fortunately, even during my period of Marxism I had respect for evidence and logic,” Sowell told an interviewer in 2004, “so it was only a matter of time before my Marxism began to unravel as I compared what actually happened in history to what was supposed to happen.”

Chromosomes and skin color and partisan loyalty didn’t dictate his thinking. He embraced time-tested, transcendent principles grounded in the reality of how things really are — as opposed to the fantastical imaginings of what he trenchantly called the “Vision of the Anointed.” Sowell’s book on that subject (published in 1995, the same year the Anointed One, Barack Obama, emerged on the national scene with his fabrication-filled memoir, “Dreams of My Father”) thoroughly dismantled the tyranny and tactics of self-described “progressives” whose control-freak narcissism is wrapped in good intentions and false narratives.

Sowell’s assessments were rooted not in fear or hatred or fanaticism or moral superiority, but in empirical evidence. He judged outcomes, not oration. He didn’t make excuses. He made sense.

“In the anointed we find a whole class of supposedly ‘thinking people’ who do remarkably little thinking about substance and a great deal of verbal expression,” Sowell observed. “In order that this relatively small group of people can believe themselves wiser and nobler than the common herd, we have adopted policies which impose heavy costs on millions of other human beings, not only in taxes, but also in lost jobs, social disintegration, and a loss of personal safety. Seldom have so few cost so much to so many.”

In another giant contribution to contemporary political and policy analysis, Sowell’s 1999 tome, “The Quest for Cosmic Justice,” addressed the abject failures of those who seek to cure all inequities, inequalities, disparities and ills through government intervention. He summed up his findings thusly:

1. The impossible is not going to be achieved.
2. It is a waste of precious resources to try to achieve it.
3. The devastating costs and social dangers that go with these attempts to achieve the impossible should be taken into account.

The former leftist playwright David Mamet, in his 2008 manifesto, “Why I Am No Longer a Brain-Dead Liberal,” cited his exposure to Sowell, whom he dubbed “our greatest contemporary philosopher,” as a critical factor in his conversion. Whether tackling the “bait and switch media,” the “organized noisemakers,” or the lawless enablers of “social disintegration, Thomas Sowell’s dozens of academic books and thousands of newspaper columns have sparked generations of his readers across the political spectrum to think independently and challenge imposed visions.

Though it has been decades since he taught in a formal classroom, his students are legion.

Michelle Malkin is a columnist for WorldTribune.com and the author of the new book “Who Built That: Awe-Inspiring Stories of American Tinkerpreneurs. Her e-mail address is malkinblog@gmail.com.