The lofty motto of the Environmental Protection Agency is “protecting people and the environment.” In practice, however, EPA bureaucrats faithfully protect their own people and preserve the government’s cesspool of manipulation, cover-ups and cronyism.

Just last week, Mark Levin and his vigilant Landmark Legal Foundation went to court to ask federal district judge Royce Lamberth to sanction the EPA “for destroying or failing to preserve emails and text messages that may have helped document suspected agency efforts to influence the 2012 presidential election.” 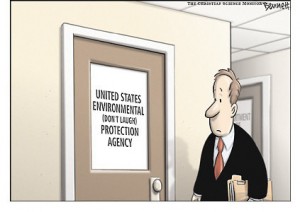 The motion is part of a larger Freedom of Information Act (FOIA) lawsuit to force EPA to release emails and related records from former EPA Administrator Lisa Jackson and others “who may have delayed the release dates for hot-button environmental regulations until after the Nov. 6, 2012, presidential election.”

Thanks to Levin and Landmark, Jackson and other EPA officials admitted in depositions that they used personal, nongovernmental email accounts to hide communications about official EPA business sent and received on their government-issued BlackBerries and smart phones. The agency has continued to drag its feet for two years in response to Landmark’s FOIA requests.

Levin minced no words: “The EPA is a toxic waste dump for lawlessness and disdain for the Constitution.” Not to mention disdain for the public’s right to know. As Levin added: “When any federal agency receives a FOIA request, the statute says it must preserve every significant repository of records, both paper and electronic, that may contain materials that could be responsive to that request.”

The agency is legally obliged to notify all involved in the suit to preserve everything in their possession that could be discoverable in the litigation. But the feds have bent over backward to delay and deny. “(T)he people at the EPA, from the administrator on down, think they’re above the law, that no one has the right to question what or how they do their jobs,” Levin blasted. “Well, they’re wrong. The laws apply to everyone, even federal bureaucrats.”

That’s a bedrock principle the EPA has defied over and over again. As I first reported 13 corruption-stained years ago in 2001, former EPA head Carol Browner oversaw the destruction of her computer files on her last day in office under the Clinton administration — in clear violation of a judge’s order requiring the agency to preserve its records. Browner ordered a computer technician: “I would like my files deleted. I want you to delete my files.” In 2003, the agency was held in contempt and fined more than $300,000 in connection with another email destruction incident under Browner’s watch.

It was Levin’s Landmark Legal Foundation — upheld by Judge Lamberth — that held the corruptocrats accountable then, as they are now.

As President Obama’s energy czar, Browner went on to bully auto execs “to put nothing in writing, ever” regarding secret negotiations she orchestrated on a deal to increase federal Corporate Average Fuel Economy (CAFE) standards. She was also singled out by Obama’s own independent oil-spill commission for repeatedly misrepresenting scientists’ findings and doctoring data to justify the administration’s draconian drilling moratorium.

Browner previously had been caught by a congressional subcommittee using taxpayer funds to create and send out illegal lobbying material to more than 100 left-wing environmental organizations. She abused her office to orchestrate a political campaign by liberal groups, who turned around and attacked Republican lawmakers for supporting regulatory reform.

The names may change, but the politicized rot stays the same. The GOP staff of the Senate Environment and Public Works Committee issued a detailed report this week on the secretive “Billionaire’s Club” behind EPA. The analysis exposed how a massive network of left-wing foundations, activists and wealthy donors exploits IRS-approved “charitable” status and tax-deductible donations to lobby illegally on behalf of the EPA and operate a “green revolving door” between government and far-left groups.

Among the key players: the Environmental Grantmakers Association, which coordinates green grants and refuses to divulge its membership list to Congress, and Democracy Alliance, the dark-money outfit led by Philip Gara LaMarche that does not disclose its members or donor-recipients.

“These entities propagate the false notion that they are independent citizen-funded groups working altruistically,” according to the report. “In reality, they work in tandem with wealthy donors to maximize the value of the donors’ tax-deductible donations and leverage their combined resources to influence elections and policy outcomes, with a focus on the EPA.”

Saving the planet? Ha. The leftist-controlled Environmental Corruption Agency is only in business to serve its pals and subvert its political enemies, while endangering resource security and sabotaging the deliberative process. Real environmental protection starts with draining this fetid swamp.