The “war on women” political slogan is in fact a war against common sense.

It is a statistical fraud when Barack Obama and other politicians say that women earn only 77 percent of what men earn — and that this is because of discrimination. 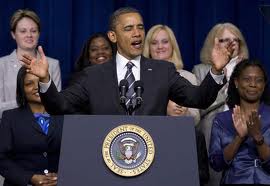 It would certainly be discrimination if women were doing the same work as men, for the same number of hours, with the same amount of training and experience, as well as other things being the same. But study after study, over the past several decades, has shown repeatedly that those things are not the same.

Constantly repeating the “77 percent” statistic does not make them the same. It simply takes advantage of many people’s ignorance — something that Barack Obama has been very good at doing on many other issues.

What if you compare women and men who are the same on all the relevant characteristics?

Even where relevant statistics are available, careful judgment is required to pick samples of women and men who are truly comparable.

For example, some women are mothers and some men are fathers. But does the fact that they are both parents make them comparable in the labor market? Actually the biggest disparity in incomes is between fathers and mothers. Nor is there anything mysterious about this, when you stop and think about it.

How surprising is it that women with children do not earn as much as women who do not have children? If you don’t think children take up a mother’s time, you just haven’t raised any children.

How surprising is it that men with children earn more than men without children, just the opposite of the situation with women? Is it surprising that a man who has more mouths to feed is more likely to work longer hours? Or take on harder or more dangerous jobs, in order to earn more money?

More than 90 percent of the people who are killed on the job are men. There is no point pretending that there are no differences between what women do and what men do in the workplace, or that these differences don’t affect income.

Even when women and men work at jobs that have the same title — whether doctors, lawyers, economists or whatever — people do not get paid for what their job title is, but for what they actually do.

Women lawyers who are pregnant, or who have young children, may have good reasons to prefer a 9 to 5 job in a government agency to working 60 hours a week in a high-powered law firm. But there is no point comparing male lawyers as a group with female lawyers as a group, if you don’t look any deeper than job titles.

Unless, of course, you are not looking for the truth, but for political talking points to excite the gullible.

Even when you compare women and men with the “same” education, as measured by college or university degrees, the women usually specialize in a very different mix of subjects, with very different income-earning potential.

Although comparing women and men who are in fact comparable is not easy to do, when you look at women and men who are similar on multiple factors, the sex differential in pay shrinks drastically and gets close to the vanishing point. In some categories, women earn more than men with the same range of characteristics.