It’s a cliche to say that Washington, D.C., is “out of touch” with voters, but there’s something to it.

Arguably, in 2012, the Republican Party seemed focused on a subject — debt — that wasn’t a high priority for average Americans. Sincere Republicans (including this columnist) believe it should be. Nations that cannot pay their bills eventually fall into decline, hardship and worse when governments resort to inflation to pay off their debts. It’s easier to make small adjustments now than to endure wrenching hardships later. But the voters remain to be convinced. 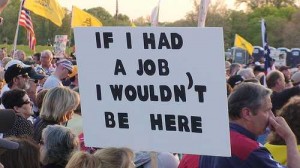 The Democratic Party today is similarly situated regarding a matter of indifference to voters — climate change. Sincere Democrats believe that Americans should be worried about global warming. And just as Republicans have attempted to frighten Americans about the consequences of failing to act on our national debt, Democrats are trying to scare voters with doomsday scenarios, the latest being the Obama administration’s 829-page report on “climate disruption.” Voters remain to be convinced.

When Gallup asked Americans an open-ended question about the “most important problem facing this country,” the economy and jobs led by a mile. In April, a total of 47 percent said the economy and jobs were the top priority. No other issue broke double digits. Not the gap between rich and poor. Not taxes. Not corporate corruption. Not fuel prices. The highest percentage among the lesser issues was the 9 percent who mentioned the federal budget deficit and/or the federal debt. These data have been consistent all year. As for climate change, only 1 percent listed the environment as the most important problem. Other polls show similar results.

For both parties, it would seem that addressing the voters’ chief worries would be the path to getting their attention on other matters.

Some Republicans appear to have shifted their emphasis. Sen. Mike Lee of Utah has authored a family-friendly tax-reform proposal and delivered a biting speech opposing crony capitalism (or, as I prefer, “corporatism”).

Sen. Marco Rubio has proposed changes to safety-net programs that would reward work and offer states more flexibility. Sens. Orrin Hatch, Tom Coburn and Richard Burr have proposed a replacement for Obamacare that would cover the uninsured without raising costs for everyone. Conservative publications like the National Review and National Affairs have been stressing reforms that would enhance opportunity for struggling Americans.

The Democrats have proposed increasing the minimum wage and raising taxes on the rich, both of which are popular with voters. But taxes have been raised several times during the Obama years (some are hidden in Obamacare and Dodd/Frank) without any noticeable improvement in the economy. The Democrats substitute talk about the gap between rich and poor (i.e., stoke resentment) for any clear policy agenda to improve the economy. The income gap, meanwhile, has increased during the Obama years.

What would it mean for the average voter who worries most about the economy and jobs if each party gets its way?

If Republicans were successful in putting brakes on the ballooning federal debt, the economy would probably improve. In the 1990s, when a Democratic president and a Republican Congress were succeeding in balancing the budget, the private sector practically sighed with pleasure. Labor-force participation rates increased. Economic growth averaged 3.8 percent.

If Democrats got their fondest wishes regarding climate change, the U.S. would spend billions more on solar, wind and other energy sources that are more expensive than hydrocarbons and incapable of meeting our energy needs. We would simultaneously delay or impede the development of cheap and environment-friendly natural gas, and tax and extensively regulate industries that produce or rely on fossil fuels. The result would be slower economic growth and more hardship.

The sacrifice would be worth it if the danger to be avoided were clear. It isn’t. Climateers have not answered the biggest question: Why, in contrast to their confident predictions, has warming paused for the past 17 years? Nor have they answered the second biggest question: How would America taking an economic hit alter the world’s temperature when China, Indonesia, Brazil, India — and even Germany and Great Britain — are all increasing their consumption of coal? The third unanswered question is: Why wouldn’t further economic growth in the U.S. continue to do what it has always done in the past — make us greener and cleaner?

The Democrats’ doomsday predictions are phantasms spun of speculation, worst-case assumptions and panic aimed at increasing the government’s control of economic life. The Republicans’ doomsday fears are based on the arithmetic certainty that we cannot pay the estimated $86 trillion in debt we’ve amassed.

debt, global warming, LIFE, Mona Charen, The political class of both parties is out of touch with voters, WorldTribune.com