The prohibitively high cost of liberalism 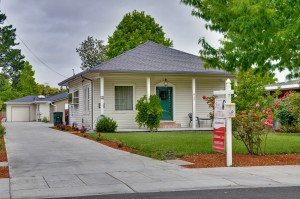 One of those costs appeared in an announcement of a house for sale in Palo Alto, the community adjacent to Stanford University, an institution that is as politically correct as they come.

The house is for sale at $1,498,000. It is a 1,010 square foot bungalow with two bedrooms, one bath and a garage. Although the announcement does not mention it, this bungalow is located near a commuter railroad line, with trains passing regularly throughout the day.

Lest you think this house must be some kind of designer’s dream, loaded with high-tech stuff, it was built in 1942 and, even if it was larger, no one would mistake it for the Taj Mahal or San Simeon.

This house is not an aberration, and its price is not out of line with other housing prices in Palo Alto. One couple who had lived in their 1,200 square foot home in Palo Alto for 20 years decided to sell it, and posted an asking price just under $1.3 million.

Competition for that house forced the selling price up to $1.7 million.

Even a vacant lot in Palo Alto costs more than a spacious middle-class home costs in most of the rest of the country.

How does this tie in with liberalism?

In this part of California, liberalism reigns supreme and “open space” is virtually a religion. What that lovely phrase means is that there are vast amounts of empty land where the law forbids anybody from building anything.

Anyone who has taken Economics 1 knows that preventing the supply from rising to meet the demand means that prices are going to rise. Housing is no exception.

Yet when my wife wrote in a local Palo Alto newspaper, many years ago, that preventing the building of housing would cause existing housing to become far too expensive for most people to afford it, she was deluged with more outraged letters than I get from readers of a nationally syndicated column.

What she said was treated as blasphemy against the religion of “open space” — and open space is just one of the wonderful things about the world envisioned by liberals that is ruinously expensive in the mundane world where the rest of us live.

Much as many liberals like to put guilt trips on other people, they seldom seek out, much less acknowledge and take responsibility for, the bad consequences of their own actions.

There are people who claim that astronomical housing prices in places like Palo Alto and San Francisco are due to a scarcity of land. But there is enough vacant land (“open space”) on the other side of the 280 Freeway that goes past Palo Alto to build another Palo Alto or two — except for laws and policies that make that impossible.

As in San Francisco and other parts of the country where housing prices skyrocketed after building homes was prohibited or severely restricted, this began in Palo Alto in the 1970s.

Housing prices in Palo Alto nearly quadrupled during that decade. This was not due to expensive new houses being built, because not a single new house was built in Palo Alto in the 1970s. The same old houses simply shot up in price.

It was very much the same story in San Francisco, which was a bastion of liberalism then as now. There too, incredibly high prices are charged for small houses, often jammed close together. A local newspaper described a graduate student looking for a place to rent who was “visiting one exorbitantly priced hovel after another.”

That is part of the unacknowledged cost of “open space,” and just part of the high cost of liberalism.