The reckless endangerment of U.S. warfighters has got to stop

By Billy and Karen Vaughn

Once again, U.S. forces have been subjected to the cruelest form of betrayal in war: an insider attack.

[See also: By waiting until now to tell his story, Gates let down his country and its troops] 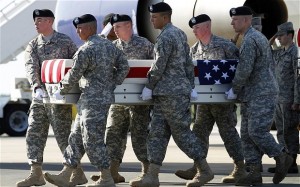 When Rules of Engagement (ROE) are honored on only one side of the battlefield, our troops die in droves.

U.S. soldiers in Afghanistan are now forced to fight a two-front war. Before each deployment, these soldiers understand fully that, day after day, they will do battle against relentless terrorists with shifting loyalties and unspeakable hatred against us. But none could foresee that the killing field would open from their rear: the American government.

Our government’s incessant tightening of already restrictive rules of engagement, compounded by the failed counterinsurgency strategy — also known as “winning hearts and minds” — has made an otherwise primitive enemy formidable.

In 2009, as the Obama administration authorized a troop surge, Army Gen. Stanley McChrystal, then-commander of U.S. forces in Afghanistan, also tightened the rules of engagement. He limited the use of force against residential compounds and restricted the use of air-to-ground munitions and indirect fire in residential areas. The goal of these new rules: prevent civilian casualties. Subsequent tactical directives reinforced these standards.

As a result, our best and brightest come home in body bags as politicians and lawyers dine over white linen tablecloths; writing, modifying, and re-modifying these lethal rules. While originally designed to create a basic set of standards for the use of force in times of war, these rules are now often unintelligible.

The armed forces are committed primarily to serving the gods of political correctness and nation building — not protecting our troops. Our soldiers, en masse, now see these rules as the means by which they will most likely die.

“I had to get out. I have a family who needs me. I didn’t join to be sacrificed. I joined to fight,” said an Army Ranger who recently left the military.

This decision came shortly after he lost a close friend to the ROE.

He explained how the Taliban had attempted an ambush on his friend’s squad but quickly realized they were in a battle they couldn’t win and began retreating. While chasing them, the U.S. soldiers were ordered not to engage due to the slight chance the Taliban had laid down their arms as they ran through some type of shack. While arguing with leadership at the JOC (Joint Operations Center), his friend was shot and killed.

“I got out because I couldn’t take it anymore,” said a Navy SEAL who left his job only a few years shy of full retirement. “We tried to explain how much reckless danger we were being exposed to and they [senior leadership] told us we were being illogical.”

This type of response has created a growing crisis of confidence between our warfighters and senior military leadership. The Navy SEAL’s argument wasn’t illogical at all. A gut-wrenching pattern began in early 2009, a pattern completely ignored by Congress, the White House, and apparently the Department of Defense. In the first seven plus years of war in Afghanistan (October 2001 – December 2008) we lost 630 U.S. soldiers, according to icasualties.org. Yet, after the implementation of the counterinsurgency strategy in 2009, over the next five years, the U.S. death toll skyrocketed to 2,292.

Seventy-three percent of all U.S. deaths in Afghanistan have taken place since 2009.

While concern over being killed due to these policies weighs heavily on the minds of those we spoke with, the deepest pit in the stomach for many of our warriors comes from fear of prosecution should they violate these absurd and ever-changing ROE.

The last thing a warfighter should ever be forced to experience is unnecessary fear.

However, today’s warfighters have the grave misfortune of serving leaders who elevate the virtues of inaction over action. The message? If you dare use your training or your gut instinct, if you have the fortitude to fight for your life or the desire to kill the enemy, there is a good chance you will be punished.

The physiological capacities of a true patriot cannot tolerate the vile stench of injustice, especially when perpetrated against those who defend us. Its wretched aroma permeates the core and demands a response.

We’re counting on you, the American patriot, for that response. We must defend our defenders. Please, spread the news and demand change.