War on work: Subsidizing wasted human potential is not compassionate

The number of Americans enrolled in Medicaid has increased from 29 million in 1990 to 73 million today — an increase of 252 percent over a period when the nation’s population increased 30 percent.

Medicaid amounts to about 40 percent of the total spending on the 10 largest means-tested federal government programs targeted at low-income Americans. According to the Congressional Budget Office, spending on these programs has tripled as a percentage of our GDP over the last 40 years.

Does all this mean we are becoming a more fair and compassionate nation? 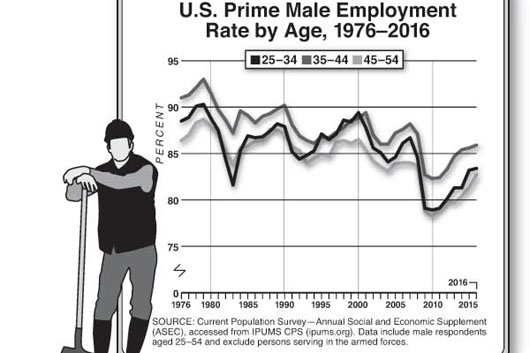 That might have been the intention. But if we honestly look at what is happening, we will see things have gone badly astray.

Some perspective on this is available in a new article by Harvard University economist Edward Glaeser in the City Journal magazine of the Manhattan Institute.

The article, “The War on Work — and How to End It,” paints a dismal picture of the direction in which our national culture is trending. Specifically, the deterioration of our culture of work, particularly among “prime-age” men, those between 25 and 54.

According to Glaeser, 95 percent of “prime-age” men were working in 1967. However, during the last recession, over 20 percent of this group was not working. Today, it remains at 15 percent.

One reason why we’re not seeing robust growth in our economy despite today’s low unemployment rate is that the low rate reflects large numbers of workers who have dropped out of the work force. The unemployment rate just considers those actively looking for work — not those who have stopped looking.

Most recent data from the Bureau of Labor Statistics show that 62.7 percent of the workforce is working, compared to 66 percent in 2000. According to Nicholas Eberstadt of the American Enterprise Institute, if work rates today were what they were in 2000, there would be 10 million more Americans earning salaries.

What is happening? Why are droves of Americans, particularly “prime-age” men, dropping out of the work force?

Glaeser offers a number of hypotheses. But major in this equation is the dramatic growth of the American welfare state. The welfare state might have been driven by good and compassionate intentions. But to a large and destructive extent, it has subsidized and encouraged not working.

Which brings us back to Medicaid.

Eberstadt writes, “According to the Census Bureau’s SIPP survey (Survey of Income and Program Participation), as of 2013, one fifth (21 percent) of all civilian men between 25 and 55 years of age were Medicaid beneficiaries. For prime-age people not in the work force, the share was over half (53 percent).”

Medicaid is footing the bill for a good chunk of the opioid epidemic.

We must be a compassionate nation as well as a productive nation.

But compassion cannot be confused with subsidization of poor values and waste. Blindly dropping taxpayer funds from helicopters is not compassion.

As we have the very important discussion now taking place about health care, about Medicaid, and about other well-intentioned but ill-conceived government programs, let’s keep this in mind.

Star Parker is an author and president of CURE, Center for Urban Renewal and Education. Contact her at www.urbancure.org.