The Obama administration doesn’t have watchdogs. It has whitewash puppies.

The president’s Chicago bullies have de-fanged true advocates for integrity in government in D.C. from day one. So the latest report by the Senate Homeland Security and Government Operations Committee on corruptocrat Charles K. Edwards, the former Department of Homeland Security inspector general, isn’t a revelation. It’s confirmation. 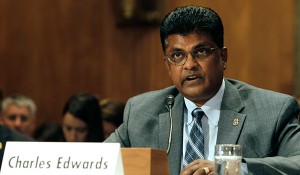 Investigators found that Edwards compromised the independence of his office by socializing and sucking up to senior DHS officials. “There are many blessings to be thankful for this year,” the sycophantic Edwards wrote to the DHS acting counsel on Thanksgiving 2011, “but one of the best is having a friend like you.” Geez, get them a room.

Whistleblowers outlined how Edwards cozied up to multiple DHS execs and legal staffers, who directed him to alter reports on immigration enforcement, TSA screening and the Secret Service’s dalliances with prostitutes in Argentina. Edwards failed to obtain independent legal analysis of ethics issues. The IG counsel was cut out of the loop. Edwards ordered reports to be doctored or delayed. He failed to recuse himself from audits and inspections that had conflicts of interest related to his wife’s employment.

The Obama White House was quite happy, however. The administration installed this 20-year career bureaucrat as acting DOJ senior watchdog despite the fact that he had zero experience conducting audits, investigations and inspections — the three fundamental duties of an inspector general. They got exactly what they needed: A do-nothing, know-nothing, toothless lackey.

Edwards’ main non-accomplishment was carrying water for the Obama corruptocracy as he dithered on the internal investigation of Alejandro Mayorkas, who was confirmed late last year as the No. 2 official at Homeland Security. As I’ve previously reported, veteran internal whistleblowers told Capitol Hill about fraud, reckless rubber-stamping and lax enforcement under Mayorkas’ tenure as head of the U.S. Citizenship and Immigration Services.

Put on your shocked faces: The DOJ’s IG probe into Mayorkas’ role on fast-tracking visas for wealthy Chinese investors on behalf of GreenTech — the crony company with ties to Democratic Virginia Gov. Terry McAuliffe and Hillary Clinton’s other brother, Anthony — has yet to be completed after more than a year.

And the current kennel of Obama cover-up enablers masquerading as watchdogs includes Interior Department acting IG Mary Kendall. She remains under investigation for allegations that she potentially helped White House officials cover up their doctoring of scientific documents that led to the fraudulent, job-killing drilling moratorium of 2010.

Then there was former DOJ acting inspector Cynthia Schnedar, a longtime employee and colleague of now-Attorney General Eric Holder, who recklessly released secret Operation Fast and Furious audiotapes to the U.S. Attorney’s Office in Phoenix before reviewing them. She resigned in 2012 to avoid the heat.

When the Senate panel called Charles K. Edwards to testify last December about his own hot ethics mess, the White House promptly whisked Edwards out of the job and transferred him to the “science and technology” division of DOJ.

Funny how the “most transparent administration in American history” loves to play hide and seek with its dirty watchdogs. Heels, the whole lot of them.