Nuclear power? Greens would pave paradise, put up the windmills

Let’s stretch our imaginations for a moment and assume that the Left is right that global warming will bring apocalyptic warming by the end of the century and that the only way to save the planet from extinction is to stop using fossil fuels right now.

That will be a spectacular disruption to world economic prosperity, because cheap fossil fuels account for about two-thirds of all electric power generation and at least 80 percent of transportation fuel.

But if we did stop using fossil fuels, what would make the most sense as a mass-scale substitute to coal, natural gas and oil? What could reduce carbon emissions while also keeping energy affordable and reliable? 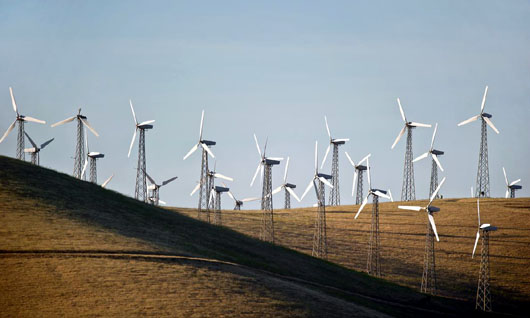 If you answered “wind and solar power,” you flunk. These are the most expensive and impractical alternatives. The obvious solution to keeping the world’s cellphones, computers, homes and factories powered up with minimal economic disruption, if it ever came to that, would be for the world to build hundreds of nuclear power plants.

To state an obvious point that almost all the Sierra Club elites and the Michael Bloombergs of the world choose to ignore: Nuclear power can give us all the power we need to keep our modern industrial and technological world economy rolling without emitting any greenhouse gases.

Yet nuclear power is declining as an alternative energy source, and plants are being shuttered at a record pace. The big problem for atomic energy is that it can’t compete on price with the new age of cheap shale gas and, to a lesser extent, clean coal.

The regulatory burden on nuclear energy is also a killer, costing an estimated $9 million per plant, according to the American Action Network.

One of green energy’s fatal flaws is that it isn’t scalable for large industrial economies and thus these energy sources make nations highly vulnerable to crippling brownouts and blackouts, as Europe and Australia have learned of late.

For those who don’t drink the Kool-Aid of the radical left environmentalists, these are incontrovertible facts. But here and around the world the Left is about as hostile to nuclear power as they are to oil and coal.

I just got back from an economic conference in Korea. While I was there the newly elected left-of-center president, Moon Jae-In, announced a “nuclear-free” era for the nation, starting with the shutdown of a major nuclear reactor.

The greens were practically dancing in the streets. But why? Few nations have been as reliant on nuclear power as Korea. In many ways, cheap and reliable atomic energy helped make possible the “miracle on the Han River” — i.e., the swift post-World War II economic surge of Korea. President Jae-In says that renewable energy will take its place.

From an environmental perspective what is happening in the U.S., Korea and around the world is asinine.

Why would you want to shut down a nuclear plant, which requires at most about 1 square mile of land, to replace that power source with windmills, which would require 300 square miles of land to be paved over? Do environmentalists really believe that green progress means looking out at America’s majestic mountains, forests, green oceans, wilderness areas and deserts and viewing miles upon miles of nothing but windmills and solar paneling?

I’m not a cheerleader for nuclear power. The storage of nuclear waste and the accidents such as Fukushima make everyone understandably nervous.

In the U.S., nuclear plants generally can’t get private insurance to cover accidents, and so the industry relies heavily on the federal government for subsidized insurance. Perhaps the advent of smaller reactors would alleviate the public’s fears.

My point here is that nothing exposes the insincerity of the global climate-change movement as does the Left’s hatred of nuclear power. We can save the planet from climate change and have all the power we need at affordable prices. But just as the greens are against clean natural gas and fracking, they also oppose nuclear power.

The radical environmentalists are insisting that the only energy alternative that will save the planet is wind and solar power — the two options guaranteed to most decelerate modern industrialization and economic progress across the globe. Perhaps that is what the far Left really wants: to force mankind to slow down growth and human advancement. If that is their real agenda, then forcing businesses and families to use inferior and expensive energy is a smart strategy.

Stephen Moore is a columnist for WorldTribune.com, and a distinguished visiting fellow at the Heritage Foundation and a senior economic analyst with CNN.