If it concerns sex in any way, you can be sure that our culture will fixate on it and manage to defy common sense with hyperventilating indignation. Same-sex marriage roiled the waters for decades, but now that the Supreme Court has big-footed that question, culture warriors are prowling for new realms of transgression to embrace. So, coming soon to a bathroom near you: transgenderism.

I’m just back from a weekend at Harvard University where unisex bathrooms are the norm. On behalf of womankind, I say: To the Bathroom Barricades! 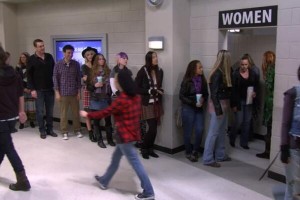 Bathroom injustice has been a feature of the world for a very long time. Ask any woman. Most buildings feature equal-sized bathrooms for the two sexes — an automatic disadvantage for women, who cannot use urinals (at least as of this writing). At every concert, stadium, lecture hall or large meeting room, the line for the ladies’ room will usually curl out the door and around corner while the men breeze through their facility with assembly-line efficiency. The only building in Washington, D.C., I know of where this is not the case is Constitution Hall, built by and for the Daughters of the American Revolution. Constitution Hall has twice the number of women’s bathrooms as men’s. Revolutionary indeed.

Some opponents of permitting “transgender” individuals to use the bathroom of their subjective feelings rather than their biology point to the risk of sexual assault. That seems a negligible risk. Hard to imagine rapists donning skirts the better to grab women in a ladies’ room surrounded by female witnesses. But the trans bathroom movement offends in other ways.

Gender-neutral bathrooms are nothing new. We use them on airplanes and trains all the time. At the risk of offending some men, there are two things that should be said about this. First, we women hate using unisex public bathrooms.

Men are messy. They leave the seat up most of the time, and sometimes fail to raise it in the first place, if you get my drift. Sure, some women are also unsanitary — but fewer. One survey found that 62 percent of men, but only 40 percent of women, failed to wash their hands after using the toilet.

Second, airplane bathrooms are single use and thus don’t raise privacy/modesty concerns (I know, I’ve heard those urban legends, too, but leave that aside). A locker room, dressing room, or larger public bathroom is a different matter.

Outside of stalls, women in public restrooms change their clothes, adjust their undergarments, purchase supplies from vending machines geared toward women and otherwise engage in activities they would be uncomfortable conducting under the eyes of a male (even one who feels himself to be female, or aspires to be female after years of surgery, depilatories and hormonal dousings).

People with gender dysphoria, like those with other psychological ailments, doubtless feel miserable much of the time, and competent professionals should treat them. The former chief of psychiatry at Johns Hopkins University, Dr. Paul McHugh, has studied the matter for decades and opposes “gender reassignment surgery.”

In most areas of life, when someone holds a view of himself that is at odds with reality — McHugh offers the example of people with “body dysmorphic disorder,” who falsely believe themselves to be horribly ugly — psychiatry offers therapy to cure them of their mistaken perception. Only in the area of sex does the profession, and the larger society, lose its grip on reason completely and declare that any and all delusions, wishes, hopes and behaviors are to be ratified and even celebrated in the name of non-discrimination.

We’ve become so discombobulated that perfectly intelligent people will say, without noticing the contradiction, that homosexual behavior comes from an inborn trait, but the “male/female binary” is a socially constructed fiction.
The Fourth Circuit Court of Appeals has now ruled that a “transgender” 17-year-old must be permitted to use the bathroom of her imagined “gender identity” rather than her sex. “It’s easy to forget that these debates are about personal dignity,” scolded The New York Times.

There is nothing dignified about ratifying an unhappy person’s tragic misperception. What if the young person considered herself African-American, like Rachel Dolezal? Should she get preferences in college admission? Or what about Danny Almonte, who was 14 when he starred in the 2001 Little League tournament? If he felt 12, does that make it ok?

When you figure that out, culture warriors, let us know. In the meantime, hands off the ladies’ rooms.