One veteran’s story: The VA is ‘an enormous cash cow’ for whom veterans ‘have become incidental’

As Obama administration officials pivot like haywire jewelry-box ballerinas to divert attention away from the nationwide Veterans Affairs disgrace, a reader who has been fighting the system urged me to urge Capitol Hill and the American public to stay focused. 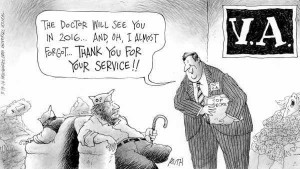 This former Special Forces soldier and medic served his country for 25 years. He worked in the health care field managing military field medical clinics. “I know how health care is supposed to run, even in austere or low-budget environments,” he says. And in his nightmarish, ongoing experience, the VA is an epic, deadly, monstrous failure. He minces no words: “They’re getting billions of dollars, and they treat veterans like s-t. There’s no accountability, no buy-in, among civilian unionized employees. We mean nothing to them. It’s like going to the DMV for your health care.”

Over the past four years, the veteran tells me, he has been under direct VA care for two major line-of-duty-related injuries, including one combat-related injury. One of the medical centers that treated him — or rather mistreated him and maltreated him — is the Coatesville, Pa., VA. It’s the same facility where four vets died due to medical malpractice, leading to nearly $1.4 million in settlements to vets’ families, according to The Center for Investigative Reporting.

The harrowing cases included two fatal failures to monitor patients, improper management of a psychiatric patient, and wrongful diagnosis or misdiagnosis of a patient.

These details are all too familiar to my reader. “I have been misdiagnosed, had a missed diagnosis, and had delays of care lasting months,” he says. “My records have been lost, changed, split and mismanaged.” He has experienced firsthand the same “slow-walking” of care that millions of other VA patients have encountered and scores have died from — a systemic modus operandi of “lie, delay, deny.”

The vet gets a catch in his voice as he relates a horrible anecdote. After refusing to return to the Coatesville facility and seeking treatment at another VA clinic one day, he became nauseous. Instead of allowing him to lie down on a gurney, a nurse made him vomit outside so he wouldn’t soil the bed. He believes the office was open not to treat patients, but as a front for nurses to pick up extra shifts. He has encountered similar degrading and condescending treatment across the VA system.

When he appealed for help and advocacy within the system, the veteran was met with a stone wall of “Not My Job”-ism. Through denials of care, contraindicated medications, repeated mistakes and delays of pharmacy items, he endured callousness, humiliation and stigmatization. “When I get angry, they call me ‘crazy.'” Classic blame-the-victim tactics from the VA abusers.

Big Government politicians want to throw more funding at the VA, as usual. The veteran offers a scathing reality check: “There is ample money to address the needs of American veterans,” he says. “The problem is far deeper and more dangerous than just secret waiting lists. The VA almost killed me; my health is worse now than it was when I entered care; my quality of life and living conditions have been nothing short of horrific as I have waited years for adjudication of my benefits case, which in the end was botched.”

Again, the vet refuses to candy-coat the roots of the festering VA scandal: “The problem is not just waiting lists. It is utter fraudulent expenditure of enormous budgets, not on veterans, but on overpaid lazy, surly civilian employees that often make it clear that a) they do not like veterans and b) that the veteran is actually a nuisance. The problem is endemic, at every level, in the VA. The unfortunate fact of the matter is this: Veterans have become incidental to the process at the VA.”

The system is “an enormous cash cow, warehousing tens of thousands of overpaid employees” who “keep the gravy-train rolling.” The vet has a plea on behalf of all of his brothers and sisters who are drowning in the VA’s “lie, delay, deny” abyss:

CORRECTION: In last week’s column, I erroneously stated that ProgressNow was responsible for an attack ad against Colorado GOP gubernatorial candidate Tom Tancredo. The ad was sponsored by Protect Colorado Values, a separate Democrat-linked outfit.