Perspective: A survey of Washington scandals since 1969

1969—U.S. Sen. Ted Kennedy hosted a party attended by six married men and six single women on Chappaquiddick near Martha’s Vineyard. Kennedy left the party with one of the women, Mary Jo Kopechne. The next morning she was found dead in Sen. Kennedy’s submerged car. 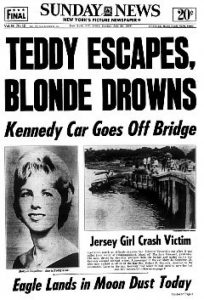 1973—Spiro Agnew became the second Vice President in U.S. history to resign when confronted with charges of extortion, tax fraud, bribery, and conspiracy.

1986—during President Ronald Reagan’s term there was a scandal of a different kind—plans were made to sell arms to anti-Soviet forces in Iran in exchange for the release of U.S. hostages.

Funds from the sale were to help Contra freedom fighters stop Soviet-backed communists from taking over Nicaragua—thus stopping communists on two fronts at no financial expense to the United States, but Democrats in Congress exposed and opposed this.

1998—President Clinton had an illicit relationship with Monica Lewinsky, whose friend, Linda Tripp, convinced her to keep a stained dress as protection to keep her from being added to the Clinton body count list, a collection of names circulating the Internet of deceased former Clinton associates.

Attempting to cover up the affair, Clinton was impeached for perjury and obstruction of justice.

2009—President Obama’s Attorney General Eric Holder was held in Contempt of Congress after refusing to release documents regarding a Fast and Furious operation which provided guns to Mexican drug gangs.

2012—prior to re-election, President Obama announced the war on terror was over. Secretary of State Hillary Clinton met with the 57 leaders of the OIC (Organization of Islamic Cooperation) promising support of a U.N. Resolution prohibiting speech insulting Islam.

On Sept. 11, an attack occurred on the U.S. Consulate in Benghazi, Libya. Six hours into the attack, the President spoke via telephone with Secretary Clinton, but no rescue was attempted.

When it was discovered that the U.S. Ambassador in Benghazi had been denied repeated requests for increased security by the State Department and that the attacks were planned and not a result of a video, Secretary Clinton responded “What difference does it make.”

Reports and emails then surfaced that U.S. arms covertly used to oust Libya’s President Gadhafi were being moved through Benghazi, similar to the gun-running “Fast and Furious” scandal, to arm fundamentalist Muslims to oust Syria’s President Assad.

When Russia came to Assad’s defense, Muslim terrorists armed and trained by the U.S. attacked into Syria and Iraq, calling themselves ISIS.

They proceeded to torture, rape, behead and displace hundreds of thousands in what Secretary of State John Kerry formally declared was a genocide. (CNN, 3/18/16)

The Los Angeles Times reported (3/27/16): “In Syria, militias armed by the Pentagon fight those armed by the CIA.”

2013—after President Obama met 157 times with the head of the IRS, Lois Lerner pleaded the 5th Amendment when asked by Congress about whether the agency targeted conservative political groups prior to the President’s re-election.

2016—Secretary of State Hillary Clinton was caught using secret email servers. When questions arose regarding lack of security and possible coordination by the Secretary of State’s office with foreign donations to the Clinton Foundation in exchange for speeches by former President Bill Clinton, 30,000 of her emails were quickly deleted. Her technology specialist, Bryan Pagliano, pleaded the Fifth Amendment on March 2, 2016.

The Justice Department, under the direction of Attorney General Loretta Lynch, initiated an investigation, but she curtailed the investigation after an unprecedented meeting at the Phoenix Airport with Hillary’s husband, Bill Clinton.

When interviewed, Lynch said “he mentioned the golf he played in Phoenix” though sources told ABC 15 “former President Clinton did not play golf during his most recent visit in Phoenix.”

FBI Director James Comey, operating under the authority of Lynch, announced the decision not to investigate Hillary, though he described her behavior as “extremely careless.”

Commentator Dick Morris explained that several of Hillary’s emails exposed nuclear scientist Shahram Amiri as an American spy, resulting in him being executed in Iran.

Since the Democrat National Committee emails were leaked a few weeks ago, three people associated with the DNC have all been found dead under what could be questionable circumstances.

Seth Rich, a DNC data analyst, was shot in the back July 10, 2016, though his wallet, credit cards, and watch were not taken.

John Ashe, former President of the United Nations, was found on June 22, 2016, dead with a barbell across his throat just days before he was scheduled to testify that during Bill Clinton’s presidency a Chinese businessman purportedly funneled illegally a hundred thousand dollars to the Democrat National Committee.

1972—WATERGATE: One of the most written about scandals in American history began when five low-level members of President Nixon’s re-election team did a third-rate break-in of the Democratic headquarters in the Watergate building.

Though Nixon was not involved, efforts to defend his subordinates led to him being implicated in a cover-up.

The House Judiciary Committee staff prepared the articles of impeachment against President Nixon.

Hillary Rodham served on the Impeachment Inquiry staff. Her conduct was described by Jerry Zeifman, the Chief Counsel of the House Judiciary Committee, as “dishonest,” being that she “engaged in a variety of self-serving unethical practices in violation of House rules,” possibly to facilitate a future run for President by U.S. Senator Ted Kennedy.

On Aug. 8, 1974, the 37th President of the United States, Richard Nixon, resigned, stating from the Oval Office:

Good evening. This is the 37th time I have spoken to you from this office …
To continue to fight … for my personal vindication would almost totally absorb the time and attention of both the President and the Congress … Therefore, I shall resign …
If some of my judgments were wrong … they were made in what I believed … to be the best interest of the Nation.

In the Middle East, 100 million people in the Arab countries, many of whom have considered us their enemy … now look on us as their friends.
We must continue to build on that friendship so that … the cradle of civilization will not become its grave.

I have taken heart from what Theodore Roosevelt once said about the man in the arena, ‘whose face is marred by dust and sweat and blood, who strives valiantly … If he fails, at least he fails while daring greatly’ … In leaving … I do so with this prayer: May God’s grace be with you in all the days ahead.

Mistakes, yes … for personal gain, never … I can only say to each … of you … we come from many faiths … but really the same God … You will be in our hearts and … in our prayers.