Six of the top eight finishers were from South Korea, one was from Communist China and none were from the United States. Where was North Korea? 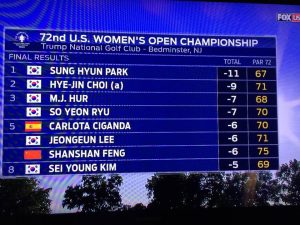 China’s Feng came to the 18th with a chance to win but took triple bogey instead after overshooting the green and dubbing her chip shot. She played that final hole the way many golf mortals would. Badly.

And Donald Trump was watching the entire dramatic finish from a secure presidential box. And why not? It was his course, after all. The president even issued one of his trademark tweets Saturday about amateur Choi’s performance.

Was the leader of China, Xi Jinping, paying attention? Is Shanshan Feng in any trouble? Professional athletes from communist state have been known to suffer consequences for performing badly on the world stage.

And whatever became of North Korea’s interest in the game now that it is a nuclear power that boasted of its successful ICBM missile test as a July 4 gift this year for the “American bastards”?

North Korean golf made the news back in 2004 when Geostrategy-Direct.com reported that a “golf game for peaceful unification of Korea,” would be attended by South Korea’s top 15 female golfers, including LPGA players, 30 businesspersons and 20 singers and movie stars.

North Korea’s Central News Agency went on to say the nation’s dictator Kim Jong-Il enjoyed golf, having shot multiple holes-in-one during his first try at the game. He reportedly aced five holes and finished 38 under par on the golf course.

The “Dear Leader” routinely shot three or four holes-in-one per round, according to the KCNA report. Kim Jong-Il, who feared flying and traveled only by train, died on Dec. 17, 2011. His son and heir, Kim Jong-Un, picked up where his father left off in the development of weapons of mass destruction.

North Korea is now a nuclear power. The state of professional golf in the isolated nation is another matter.