The dictionary defines “bogeyman” as “an imaginary evil spirit, referred to typically to frighten children.” Hello, Donald Trump. It’s not clear whether he set out intentionally to elect Hillary Clinton, but there is little question that he could not be fulfilling the role of Republican bogeyman to greater effect.

As Commentary’s Jonathan Tobin noted, during a week in which the disastrous fecklessness of President Obama and his party in the face of terrorism ought to have been Topic A, we are all talking about Trump instead. Brilliant. Tobin’s point actually applies to the entire presidential contest. By rights, it should be about the Democrats’ unraveling. From Obamacare to terrorism, from the economy to climate change, and from guns to free speech, progressive policies have proven deeply disappointing when not downright obtuse and dangerous. Clinton promises more of the same while trailing an oil slick of corruption in her wake. And yet swinging into the frame, week in and week out, the orange-maned billionaire bogeyman dominates the discussion. 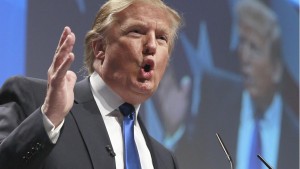 Hell yes, Republicans are anti-Hispanic bigots, Trump (a lifelong Democrat) is supposed to confirm. Just look at the way he talked about Mexican “rapists” and vowed to build a wall that Mexico will fund.

Hell yes, Republicans want to fight a war on women. Did you hear what Trump said about Megyn Kelly and Carly Fiorina?

Hell yes, Republicans are anti-immigrant, anti-handicapped, anti-Jewish and anti-Muslim. Line ’em up and Trump will offend. Not cleverly, mind you, but crudely. Donald Trump is fond of saying that our political leaders are stupid, constantly outmaneuvered at the bargaining table by shrewder Chinese, Mexicans, and Japanese. No one can accuse him of stupidity: provided his goal is to elect Hillary Clinton.

This week, while we were still burying our dead from San Bernardino, every Republican — rather than explaining why President Obama’s refusal to fight the war on terror has led to this moment — instead had to condemn Donald Trump’s mindless proposal to keep every single Muslim out of the United States until further notice. Again, he’s the perfect bogeyman.

It’s not just that what he says demands condemnation. It’s that it seems to give credence to the Democrats’ narrative.
One of the false notes in President Obama’s Sunday evening speech was his resort to one of his favorite libels about the American people he purports to lead. He scolded the country for its Islamophobia. “It is the responsibility of all Americans — of every faith — to reject discrimination. It is our responsibility to reject religious tests on who we admit into this country. It’s our responsibility to reject proposals that Muslim Americans should somehow be treated differently.”

That’s not the trouble here. America is an incredibly welcoming nation and has opened its arms to Muslims along with people from every part of the globe. Far from targeting American Muslims for discrimination, the U.S. has been a haven. Though liberals like to conjure it to slander the U.S., anti-Muslim discrimination and violence have been minimal in the U.S., even in the immediate aftermath of 9/11. (The most common targets of religious bigotry in America? Jews.)

On the other hand, it’s only common sense to proceed with caution about admitting thousands of refugees and immigrants from the part of the world that is currently aflame with Islamic extremism. That caution, not to be confused with discrimination (there is no constitutional right to come to America), was endorsed just three weeks ago by a large majority in Congress (including 47 Democrats). It isn’t anti-Muslim to seek to exclude Muslim extremists.
Leave it to Trump to lob a stink bomb that putrefies everything.

Above all, the great favor that Trump does for Obama and for Hillary Clinton is to focus on personalities instead of philosophy. Trump, of course, has nothing to offer except personality (even if its charm eludes me). But his emphasis on “getting the best people” is exactly wrong. That’s the progressive idea — that the best people know better how to run your life than you do. That’s what we’ve had under President Obama. Obama is a failure not because he’s stupid, or stubborn, or inexperienced. He’s a failure because he believes in failed ideas.

Hillary Clinton believes in all the same myths and shibboleths. After two terms of decline and decay, voters are ready for a different approach, unless someone crashes the Republican Party. Can it be pure accident that Donald Trump is playing the role to perfection?