Why Colorado’s gutless governor is in trouble

D.C. journalists called the latest Quinnipiac University poll results in Colorado’s tight gubernatorial race a “shocker.” But it’s a surprise only if you’ve been hopelessly trapped in a Beltway echo chamber.

Democratic Gov. John Hickenlooper is down 10 points against former GOP Rep. Bob Beauprez among all likely voters. The Q poll also shows him behind Beauprez by 13 points among independents. A survey conducted last week by Suffolk University for USA Today shows the beleaguered incumbent in a statistical dead heat with Beauprez. 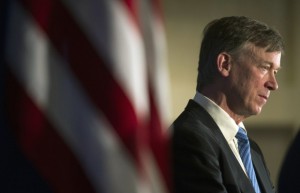 Any way you slice it, Hickenlooper has lost the trust and confidence of voters of all ideological stripes. And despite incessant “War on Women” wails from feminist and leftist groups, the candidates are essentially evenly split among male and female voters.

“Hickenlooper is behind the challenger on the key qualities voters want in a leader: honesty, caring and leadership,” Tim Malloy, assistant director of the Quinnipiac University poll, summed up upon release of the results.

Spinning furiously like a Soul Cycle instructor, a left-leaning journalist at The Washington Post on Monday blamed “partisan venom” and “a polarized, hyper-partisan environment” for Hickenlooper’s fall. But the flaky, gutless gov has no one to blame but himself.

Hundreds of thousands of dollars from Bloomberg’s gun-control groups poured into Colorado. Biden personally lobbied state Dems. Under the political gun, our self-styled “moderate” governor signed extremist ammo magazine limits and intrusive background check measures into law — which he now concedes were ineffective at fighting crime all along.

Hick’s diktats were effective at one thing: job destruction. The gun-control regulations forced Colorado ammo magazine-maker Magpul to move its offices to Wyoming and Texas. Hundreds of jobs and an estimated $80 million in tax revenue went with them. Heckuva job, Hick.

Now, the supposedly “centrist” governor has been cravenly trying to disguise his far-left stripes as he faces a tough re-election bid.

In a videotaped meeting this summer with Colorado sheriffs obtained by the indispensable Colorado website Revealing Politics, Hickenlooper:

Lied and denied talking with Bloomberg before signing the gun-control measures.

Blamed his decision to sign the radical gun laws on “(o)ne of my staff (who) made the commitment that we would sign it if it got passed.”

Admitted he didn’t do his homework until “after all the kerfuffle” — that is, the groundbreaking 2013 citizen recalls that ousted two top Democratic state legislators who carried the gun-control bills — and only got “some facts we should have had at the beginning” after he had signed the measures.

This dishonest fecklessness is why Hickenlooper’s in trouble. It has nothing to do with our citizens’ lack of “civility” or “compromise” or “moderation” — or whatever fantastical scapegoats and excuses the Beltway press corps conjures up in its elite newsroom bubbles. The most damning hit on the waffling governor’s character came not from a “partisan,” but from a grieving father.

Last month, Bob Crowell — father of 19-year-old murder victim Sylvia Crowell — blasted Hickenlooper for indefinitely delaying the execution of mass murderer Nathan Dunlap. When Hickenlooper confided in CNN that he might grant Dunlap clemency if he loses in November, Crowell didn’t mince words. “I think that’s the coward’s way out, and I view John Hickenlooper as a coward.”

Whether red, blue or purple, discerning Coloradoans smell something worse than a rat in Hickenlooper: a political opportunist who’ll lie through his teeth to cling to power. You can’t change a crapweasel, but you can vote him out.