No, Obamacare does not work, but neither do Obamacare employees

According to at least one Obamacare paper-pusher, employees at an application-processing center in Wentzville, Mo., are getting paid to sit around and do nothing. 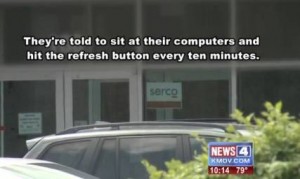 “They want to hire more people even though we still don’t have work to keep the people that we have busy,” the worker revealed. “There are some weeks that a data entry person would not process an application.”

The worker — or rather, shirker — also spilled the beans on how his colleagues are “told to sit at their computers and hit the refresh button every 10 minutes.” Another former worker at the processing facility added that the company “is a JOKE! There is nothing to do — NO WORK.”

You will not be surprised to learn that the company in charge of these Obamacare layabouts is embroiled in scandal — around the world, no less.

Multinational tech management company Serco won a $1.2 billion contract with the federal Center for Medicare and Medicaid last summer to “support” the beleaguered Obamacare health care exchanges. (According to the latest estimates, nearly half a billion dollars in taxpayer subsidies have now been squandered on inoperable or defunct health care exchanges in Massachusetts, Oregon, Nevada and Maryland.) In addition to the office in Missouri, Serco oversees Obamacare processing centers in Rogers, Ark., Lawton, Okla., and London, Ken., which are projected to “employ” up to 10,000 people.

Not long after Serco snagged its billion-dollar Cash for Obamacare Shirkers contract, news broke in Britain of a massive probe of fraud involving Serco’s parent company. The firm allegedly overbilled the government by “tens of millions of pounds” on a public contract to electronically monitor parolees. Investigators found that Serco had billed British taxpayers for tracking criminals who were dead or still in prison.

Just this week, British watchdogs called on the U.K. government to ban Serco from any further government work.
The company is also in hot water for manipulating a prison van escorting contract in London. And in Australia, Serco has been investigated and fined $15 million for mismanaging asylum detention centers across the country, where more than a dozen detainees have escaped and riots and chaos reigned.

Will someone on Capitol Hill follow the lead of KMOV-TV and find out what exactly Serco’s shirkers are doing (and not doing) with our money?

The see-no-incompetence Obama administration, for its part, has no worries, as usual. “Serco is a highly skilled company that has a proven track record in providing cost-effective services to numerous other federal agencies,” Medicare spokesman Brian Cook said in response to questions last year about Serco’s integrity. Serco’s American subsidiary is one of the largest federal prime contractors in the U.S., with oversight of our patent application and visa application processing systems, as well. Egad.

Serco is just the latest in a parade of shady federal health care contractors — from fraud-riddled Seedco to feckless CGI Federal — who are ripping off American taxpayers. While the White House amuses itself with selfies and hashtags, the Obamacare clunker keeps burning up our billions to pay do-nothings and destroyers. It’s the slush fund from hell.

but neither do Obamacare employees, LIFE, Michelle Malkin, No, Obamacare, Obamacare does not work, WorldTribune.com