The last eight months have battered the Obama administration. From the botched rollout of the health-care website to the VA scandal, events are now cementing certain impressions about Mr. Obama. Among the most damaging is this: He is unusually, even epically, incompetent. That is not news to some of us, but it seems to be a conclusion more and more people are drawing. 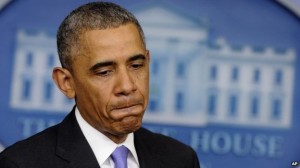 The emerging narrative of Barack Obama, the one that actually comports to reality, is that he is a rare political talent but a disaster when it comes to actually governing. The list of his failures is nothing short of staggering, from shovel-ready jobs that weren’t so shovel ready to the failures of healthcare.gov to the VA debacle. But it also includes the president’s failure to tame the debt, lower poverty, decrease income inequality, and increase job creation. …

Overseas the range of Obama’s failures include the Russian “reset” and Syrian “red lines” to Iran’s Green Revolution, the Egyptian overthrow of Hosni Mubarak, and Libya post-Gadhafi. The first American ambassador since the 1970s was murdered after requests for greater security for the diplomatic outpost in Benghazi were denied. …The president has strained relations with nations extending from Canada to Germany, from Israel to Afghanistan to Poland and the Czech Republic to many others. All from a man who promised to heal the planet and slow the rise of the oceans.

But that’s not all. The White House response to everything from the VA and IRS scandals to the seizure of AP phone records by the Department of Justice is that it learned about them from press reports. More and more Mr. Obama speaks as if he’s a passive actor, a bystander in his own administration, an MSNBC commentator speaking about events he has no real control over. We saw that earlier today, when the president, in trying to address the public’s growing outrage at what’s happening at the VA, insisted he “will not stand for it” and “will not tolerate” what he has stood for and tolerated for almost six years. … We’ve learned the hard way that Mr. Obama’s skill sets are far more oriented toward community organizing than they are to governing. On every front, he is overmatched by events. It’s painful to watch a man who is so obviously in over his head. And more and more Americans are suffering because of it.